A Troll By Any Other Name: The Case For Commenting Anonymously 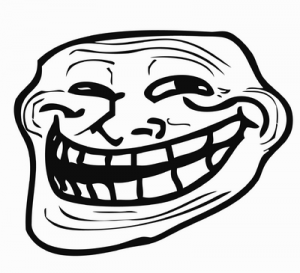 Los Angeles Times writer James Rainey wrote an incredibly thoughtful, in-depth piece this weekend on the way online commenting has evolved (or utterly devolved, depending on how you look at it) over time. As an example of how toxic comment threads can become, Rainey points to the online reaction surrounding CBS correspondent Lara Logan‘s recent assault in Cairo. He writes:

Some of the knuckle-walkers insisted on blaming the victim, saying she was too blond or too female to be in a danger zone. Others sought to mete out their digital revenge by blaming all Muslims for the attack on Logan.

I, and other Mediaite writers, have covered the response to Logan’s horrible attack so extensively that our posts on this far outnumber posts about the incident itself. Everyone with access to a computer, it seemed, had something to say, and a whole lot of it wasn’t positive or particularly thoughtful or remotely grammatically correct. But it’s important to note that not all of the vitriol aimed at Logan – or, phrased more diplomatically, surrounding Logan’s attack – was hurled anonymously or by a nebulous mob of online commenters writing furiously from the suburban New Jersey basement in which they’re all thought to reside. For example, Nir Rosen stepped down from his post as an NYU fellow following the wave of criticism he received for his Tweets making light of Logan’s attack and poking fun at CNN’s Anderson Cooper.

Rainey goes through several ways different outlets have dealt with the in-fighting, trolling, and barrage of racist / sexist / homophobic / ableist / you-name-it-ist comments frequently dotting their comments sections. The LATimes.com, for instance, “kicks off” comments that have been reported as abuse by two different visitors, and The Huffington Post employs a team of 30 people who monitor threads for abusive posts with the help of a special computer system – a system which is both necessary, given the millions of visitors HuffPost receives, and enviable to certain bloggers (working at, let’s say… oh, Mediaite) who have to manually comb through comments to clean away the muck. It’s no secret that dealing with abusive commenters is a job in itself, and not something a lot of online writers have the time or patience to deal with in addition to churning out content.

What Rainey’s article doesn’t mention, however, is that there’s a subtle but important difference between commenters that can easily be labeled trolls or spam – and, as such, categorized and swiftly dealt with – and those who are simply mean or wrong or incredibly stupid. And this is where the discussion about online anonymity grows murky.

Anonymous posting serves several purposes. For one, there’s the concern that one’s online life and commenting history may be at odds with the personal or professional life one leads offline (or in “meat space,” as a friend of mine once put it). Posting anonymously can help keep those identities separate and avoid issues about censorship or penalization for the beliefs and opinions one chooses to express online. Plus, as one LATimes.com commenter aptly pointed out, posting through personal online accounts like Facebook – which is increasingly working to unravel the cloak of anonymity so prevalent across the Internet – can reveal tidbits about oneself (such as one’s first and last names, or one’s picture) that not everyone commenting on a thread needs to know.

While forcing visitors to use their real names when posting online might curtail some of the more offensive or abusive comments, it won’t necessarily make people more civil to one another, not will it put an end to comments that happen to be downright inane. Telling xxxAngelBaby69xxx that she now has to go by Hortense Smith won’t necessarily help her produce comments that add to the discussion. Making NeoConHottie post as Filbert Filbertson or ComelyCommie post as Filomena Filomenez won’t help either of them stick to the thread’s topic, nor will it help them grasp the concept of sarcasm. And it’s precisely these sort of comments that swarm threads like so many horseflies on a dog turd, making them difficult to read and posts almost impossible to discuss intelligently or productively.

As I see it, posting anonymously is not the problem; in fact, it can be a beneficial way of allowing people to feel safe or comfortable enough to express themselves. The issue is implementing standards (something easier blogged about than done) on blogs themselves – standards enforced not only by editors, but also shared by those within a commenting community. In the meantime, I have no qualms about anonymous commenting. Your opinion, in this small slice of online real estate, is you identity. You are that Bieber fan, you are your political party, you are your undying love of Phish. It’s what you say with that identity, rather than the identity itself, that makes or break a comment thread.

(The first person who comments with TL:DR, gets a virtual roundhouse kick to the face.)