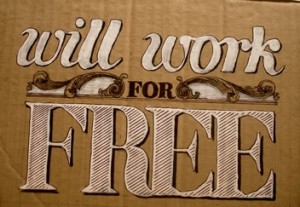 Yesterday, we brought you the story of journalist Nate Thayer, who reacted bitterly to a generous opportunity to work for The Atlantic in exchange for a pile of exposure. While Thayer and other blasted The Atlantic, the suckers who enable the freebie journalism economy were getting off without so much as a wrist slap. Since then, Thayer has been fending off charges that he plagiarized the story that The Atlantic wanted him to rewrite for free, while TechCrunch writer Gregory Ferenstein has come forward to extol the virtues of being a sucker.

Earlier this week, journalist Nate Thayer launched a mini-crusade against that model by publishing emails in which an editor for The Atlanticgenerously offered to publish some of his work for free. That touched off a blizzard of anger at The Atlantic, whose editors responded by defending the unpaid contributor model as a necessity, and as something they rarely use. Now, Thayer faces accusations that he “plagiarized” the work that The Atlantic wanted to “repurpose”:

Felix Salmon noted after the story blew up, “In another layer of irony, it turns out that Thayer’s piece itself was deeply indebted to — and yet didn’t cite or link to — Mark Zeigler’s 2006 story on the same subject.”

But a deeper dive today by blogger Jeremy Duns comes right out and says it:“Nate Thayer is a plagiarist.”

According to Duns and a cached version of Thayer’s article, the original version featured a single, not-hyperlinked citation to Zeigler: “In 2001, North Korea formally invited Michael Jordan to visit Pyongyang, according to documents obtained by the San Diego Union Tribune in 2006, but Jordan declined.” Multiple links to the Union Tribune story have since been added.

There’s a bunch of other dodgy stuff that Jeremy Duns points out, but Thayer and the editor of the piece, NK News’ Tad Farrell, deny he’s guilty of doing anything wrong. From The Columbia Journalism Review:

Thayer did not see the article before it was posted. The editing process created “numerous attribution errors,” Farrell said, and Thayer pointed them out after the story was posted. The mistakes were fixed, and this, Farrell said, accounts for why Duns noticed that links to the Union-Tribune piece were added in later.

“It was not a plagiarized piece,” Farrell insisted.

Thayer also maintained that the reporting in his piece, unless attributed elsewhere, was his own.

“I am outraged, of course,” he said via email. “I will defend to the death my reporting and attribution of this piece. Every allegation is answerable.”

Plagiarism, tomahto. At best, Thayer is self-evidently guilty of super-stingy attribution, an odd practice for a guy so worked up about dignity and respect for writers. It’s also odd when compared with the detailed attribution he gave to the Atlantic editor who tried to hire him for free. The revelation takes some of the air out of Thayer’s outrage, but The Atlantic are still jerks for making him think he was getting a real job, before dropping the other shoe. Still, I maintain that the real villains here are the suckers who work for free, and enable websites like The Atlantic to insult people like Nate Thayer.

Because she knows her way around the internet much better than I do, Wonkette’s Kris E. Benson has located just such a specimen: TechCrunch writer Gregory Ferenstein, who says he was “thrilled to have the opportunity to trade a living wage in exchange for exposure.” While Kris E. is still all het up about millionaire blogrunners exploiting free labor, Ferenstein’s endorsement of working for “exposure” (for free) exposes the self-defeating premise behind it:

I got started as an unpaid “expert blogger” for Fast Company’s new user-generated content program. After hustling my way into tech conferences and bagging choice interviews, Fast Company featured my posts on the front page, which gave me just enough leeway to pitch paid blogging gigs. But “paid” is a laughable exaggeration: we’re talking $50 for 8 hours of work and, often, interstate travel. I hit the jackpot when I received a whopping $500 for a front-page investigative business report that took weeks to write, on top of travel and all-day interviews.

But, here’s the secret I never told editors: I would have done it for free. Putting CNN, The Atlantic, and Fast Company on my resume gave me extraordinary access to the top rungs of the business and political world. I was addicted to meeting fascinating people and writing (hopefully) compelling stories. It eventually gave me the credentials to get my first paid gig back at Fast Company.

Ferenstein’s timeline is a bit confusing; it sounds like he’s saying he was working for free, then got some paying gigs, which then allowed him to get his first paying gig, perhaps for Paradox Weekly. The point is, he would have done it all for free, just to slake his addiction to fascinating people. He never explains how he would balance that out with his food and shelter addictions.

Getting started in this business has always entailed a measure of sacrifice. I actually got my first paid writing gig on the strength of an essay I wrote for free, but on a user forum, not for some millionaire blog. That first gig was low-paying, but it allowed me the freedom to write what I wanted, as much as I wanted, and it allowed me to build an audience for the blog I wrote for, which would become Politics Daily. I worked hard, and became the top source of external traffic on the site. I was giving them exposure. The amount I was being paid was in no way equal to the hard work and talent (such as it was) that I devoted to the site, but it was worth something to them, and having that platform was worth something to me.

To Ferenstein, though, hard work and talent are still worthless when compared with the “opportunity” to give them away for free:

Last month, I published an op-ed for The Atlantic’s politics section supporting Congress’ move to defund the discipline of political science from the National Science Foundation. From the emails I’ve received in response, it’s sparked an important discussion within the political science community about the relevancy of modern-day academic research.

I’m yet to get around to invoicing The Atlantic. And, let’s keep this our little secret, I probably would have paid them for the opportunity get my thoughts in a publication I know political scientists read.

It would be easy to miss the truly salient point of that passage in the blinding glare of the notion that a professional of any profession would pay money for the privilege of practicing that profession. Let it go. The point that Ferenstein misses is that The Atlantic didn’t just pop into existence as an influential magazine/website. It developed its reputation by publishing material that was of interest to its audience, material that was the product of the hard work and talent of writers whom they paid. Bringing your talent and hard work to bear for an influential publication isn’t a privilege, it’s how publications become influential. If your talent and hard work aren’t worth paying for, then how can they be worth publishing, except maybe in Paradox Weekly?

I have always been a tireless evangelist for this site, particularly with other writers, precisely because exposure on this site actually does have some real value. Through hard work and talent that Mediaite delivers, we have developed a very influential audience, so dropping a column on Mediaite really can introduce your ideas, not just to our audience, but to their audiences, too. There’s far more value in Mediaite exposure than, say, a diffuse, crowded site like The Huffington Post.

Despite that, I have also always advised all of them to get paid. There are some arrangements, like cross-posting or promoting some other work, that make mutually beneficial sense under an unpaid model, but if you’re a writer, you should get paid.

I suspect that Ferenstein’s professed willingness to pay The Atlantic for the privilege of working for them is supposed to underscore just how much he loves his job, but that’s the whole point. I love to write, too, but if I can’t get someone to pay me for it, then maybe that shouldn’t be my job.