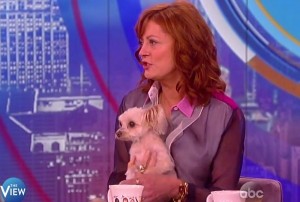 Oscar-winner and Bernie Sanders surrogate Susan Sarandon has already made plenty of waves this election season by saying she’s not sure she will even vote if her candidate isn’t nominated, even if that means handing Donald Trump the presidency. On Tuesday’s edition of The View, Sarandon expanded her attack radius to include not just Hillary Clinton, but daughter Chelsea Clinton as well. Along the way, Sarandon also reduced Hillary Clinton’s accomplishments to being “married to someone who was a president,” predicted that there will not be woman president for at least a generation, and that Bernie Sanders’ quest to get money out of politics will fail:

Don’t get me wrong, the idea of a woman president I know will happen, and I hope some day it can be the daughter of someone who’s not rich, who’s not married to someone who was a president, that that can happen in this country. And it’s not going to happen as long as we have Citizen United (sic). And the only person that’s not connected to the machine, and that’s why I’m so excited, because there’s never been a candidate, nor will there ever be a candidate in my lifetime, who hasn’t taken money from Wall Street, from Super Pacs, from Monsanto, from fracking, and I want someone with that moral commitment to people.

Sometimes, it seems like Bernie Sanders’ staff and surrogates don’t listen to themselves when they talk, like when his campaign manager said they would “consider” Hillary for vice president, or that her “ambition” will destroy the party, or when they threw dollar bills at Hillary days after a Sanders surrogate called her a “Democratic whore” from the stage at a Sanders rally, or when they say they won’t vote with their vaginae, as if that’s what Hillary’s voters are doing, or when they reduce a woman who was greatly accomplished in her own right to a power-thieving spouse.

That’s okay, though, because we hear them.