By Any Other Name: CNN Interviews Pete Rose About A-Rod Suspension? 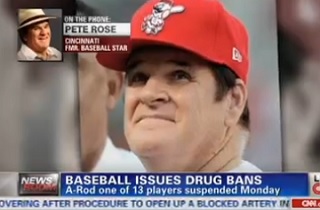 Former Cincinnati Reds Player-Manager and current disgrace to Major League Baseball Pete Rose crawled out of his lifetime suspension to give an interview to CNN’s Ashleigh Banfield, on the subject of embattled New York Yankees Third Baseman Alex Rodriguez‘ 211-game suspension. Rose delivered a few weird, qualified defenses of Rodriguez, while also trashing the last real Commissioner of Baseball, Fay Vincent, and pointedly mentioning that he bet on his own team “to win,” capping it all off with a word salad about how he bet on baseball, but he wasn’t suspended for betting on baseball.

The interview started off with a deliciously Freudian gaffe, as Banfield introduced Rose “live on the phone from Las Vegas,” forcing Rose to correct her.

“First of all, I’m in Cincinnati, Ohio,” Rose said. In body, if not in spirit. He offered his expert opinion that “if you screw up and do something, don’t lie about it, come clean,” observing that “I eventually came clean, but it was too late.”

Rose also said he’d love to parlay his genius into a job. “I would like to be working for baseball, going around to these baseball camps and telling my story, and it’s got to wake people up, as far as if you get caught, it can be a lifelong situation,” except when you get a job telling people that it’s a lifelong situation.

Banfield brought up former Commissioner of Baseball Fay Vincent. who was forced out by the owners so they wouldn’t have to have a real commissioner, and who points to Rose’s lifelong suspension as an effective deterrent. “Vincent said, no one in baseball gambles and it’s all because rose. We made it clear if you touch the third rail, you die and you don’t come back,” Banfield said. “Does somebody need to be the Pete Rose of performance enhancing drugs, and is that somebody A-Rod?”

Rose responded by whining that Vincent was one of the few guys in America who wouldn’t give a guy a second chance, and pointed out that “We’re talking about a guy right now, if I’m not mistaken, is the only guy in the history of the world to be fired as Commissioner of Baseball. Now, you know, you work for the owners, it’s a glamorous job. you’ve got to be pretty bad to be fired from the owners of baseball as Commissioner of Baseball. So I don’t think anything that Vincent says is serious, because he’s still living in the past and this is America. You make your mistakes, you take responsibility for it. Most people, most people will give you a second chance. He’s just one of those guys that won’t.”

You can watch the whole dopey thing below, but Rose’s attack on Fay Vincent neatly ties together why Pete Rose is so bad for baseball, and why baseball is so bad for baseball. I heard some guy on Morning Joe yesterday saying he was kind of rooting for A-Rod because the owners sat by and raked in the ‘roid cash for years, before finally doing something about it when it had already eroded confidence in the game. No. Screw A-Rod, and all of those guys, and the owners, and most of the fans. After the game of baseball somehow managed to survive Pete Rose, their response was to force out the only guy who provided some semblance of protection to the game, the Commissioner of Baseball, and seized that power for themselves. The commissioner was never seen as adversarial to the owners, but did ostensibly have a duty to the good of the entire game. After Fay Vincent, it was the fox running the chicken coop.

The result was a game that turned a blind eye to obvious cheating, egged on by a generation of idiot baseball fans who wanted to see “more scoring,” and also didn’t care that these guys were obviously cheating. They are all getting what they deserve now, a ruined game of, by, and for morons. And screw Pete Rose most of all, because if it wasn’t for him, baseball might still have a commissioner, and he might have put a stop to this 15 years ago, when the game could still be saved.

Here’s the full interview, from CNN, who should understand that interviewing Pete Rose about the state of baseball is like bringing in Hannibal Lecter to do a hit on the latest season of Top Chef:

Update: There are two things that, after reading some of the comments, I would like to make clear. The first is that neither Pete Rose nor Alex Rodriguez, nor any of the steroid-era “sluggers,” should ever be inducted into the Baseball Hall of Fame, and here’s why I believe that.

I’ve loved baseball all my life, and studied its history eagerly. As some have noted, and always do when the subject of Pete Rose comes up, baseball has created heroes out of some extremely flawed, and even extremely bad guys. Major League Baseball, and before it the American and National Leagues, and their owners, engaged in horrendous practices like segregation, the reserve clause, and collusion. It has also been the home of some very decent, even heroic men, like Roberto Clemente and Henry Louis Gehrig, and guys who just quietly did the impossible, like Henry Louis Aaron. The insult to those greats at having to share space in Cooperstown with the likes of Pete Rose and Mark McGwire, however, is not the point.

The point is that, no matter what the human beings who played the game and ran the game did, no matter how flawed, or bad, or even goddamned evil they were, the game was always perfect. Like life itself, a baseball game is theoretically infinite, and although it sometimes feels that way literally, it is that transcendent quality that has always been the true appeal of the game. There’s no clock, the foul lines extend into infinity, there’s no limit to the number of runs you can score, or even a limit to the number of guys you can strike out in a single inning.

Throughout its history, baseball has also transcended every social, economic, political, and generational boundary. No matter who you were, where you came from, or where you were going, you always had baseball in common with the man next to you. Even as the racist stewards of the game fought to keep it segregated, on the field of play, when white players barnstormed with Negro League teams, there was no way to segregate a Satchel Paige pitch into the stands, or to poll tax Jackie Robinson out at second. There was a truth to the game that was inescapable. The cocktail of frailties that resulted in the 1919 Black Sox scandal quickly became the exception that proved the rule, as all eight players implicated in the scandal were expelled for life, and every baseball clubhouse thereafter contained a posted warning: Bet on baseball, and you’re out for life.

Pete Rose, by betting on baseball, and even by betting on his own team, struck at the the essential truth of the game. If you believe that Rose only bet on the Reds to win, which he has admitted to, then he is guilty enough. A baseball manager has more than the game at hand to consider, and the possibility that Rose jeopardized future games for the short-term win is perversion enough. That he put himself in a position to face pressure to throw a game is just fatal gravy. He should never be admitted to Cooperstown.

But I do understand the difference between Pete Rose and the steroid gang. Those guys are much worse, and not just for what they did to baseball, which is to effectively kill it. Statistics are the language of baseball scripture, and these guys burned the game’s Dead Sea Scrolls. Sure, there have always been debates about equipment changes, rule tweaks, and the idiosyncrasies of ballparks, but beyond those baked-in elements, a home run was a home run, and a strikeout was a strikeout, for everyone. Some ‘roid-era apologists will point to Rose’s greenie-era tenure in response, but a greenie couldn’t make the ball go farther, or faster. The steroid era rendered the foundation of the sport, the connecting thread, meaningless.

Worse than that, though, the obvious cheating that these players engaged in, with the assent (at best) of the owners, ruined the lives of countless youngsters who looked up to them, some of whom followed in their footsteps to become competitors, some of whom could not. Being worse than Pete Rose should guarantee you never get into the Hall of Fame, as should being exactly Pete Rose.