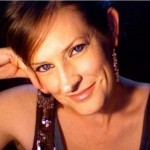 Pity poor Adam Josephs, a constable with Toronto Police Department’s 52 Division, who is suing YouTube for defamation, based on the fallout from a video showing him tersely warning a non-violent anti-G20 protester she would be arrested for assault if the bubbles she was blowing came near him or his fellow officers. Later in the video, the protester, 20 year-old social worker and volunteer street nurse Courtney Winkles, is arrested on camera (at which time her first aid supplies were confiscated), although the charges against her – and at least a thousand others taken into custody the same weekend – were later dropped. The video went viral and spawned considerable debate internationally, earning Constable Josephs the nickname “Officer Bubbles,” and garnering him dubious honors among YouTubers, like the title of “Canada’s Stupidest Cop.”

But it wasn’t the original video, filmed by TheRealNews.com’s Nazrul Islam, that rankled Josephs enough to pursue a lawsuit against YouTube; it was an extended remix of the video that featured the addition of a parody – an “Officer Bubbles” cartoon showing an overzealous cop named “A. Josephs” arresting both Santa Claus and Barack Obama – and subsequent comments by anonymous individuals which the Constable’s lawyer, James Zibarras, believes are “beyond what is reasonable” when it comes to ridicule. Josephs has filed suit against YouTube for $1.2 million, and has demanded the website reveal the identity of the remixed video’s uploader, known only as “ThePMOCanada,” as well as 24 other anonymous 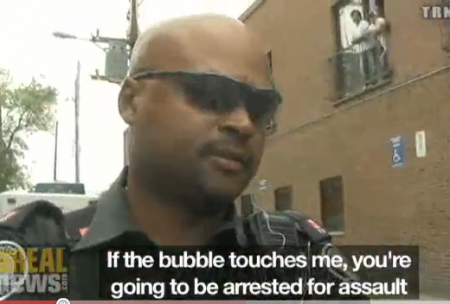 commenters. The video and comments in question have since been taken down, but a modified copy has already been posted, albeit with comments disabled.

Zibarras acknowledges that the constable’s actions may be subject to criticism, but he adds: “that reaction had this massive backlash that we say is disproportionate and incommensurate to what happened, and started getting to the point where it included threats.” I think the traumatized citizens of Toronto, some of whom were surrounded and trapped in the rain for hours between advancing lines of riot-shielded, tear gas-wielding cops during a billion dollar police action might want to just confirm exactly what you mean by the words “reasonable,” “disproportionate,” “incommensurate” and “threats.” Somehow it’s not feeling like we’re on the same page of the “who deserves civil rights more” handbook. Already Torontonians have adopted the “bubble-in” as their newest form of peaceful anti-government protest.

But does this situation really merit going full Cujo? I mean, gee, Officer Bubbles, it’s just our “bringing-up-bles!” To this generation of online delinquents (in which I include myself), getting into a flounce about internet ridicule when you’ve behaved in a ridiculous manner is about as useful as a Michael Lohan-penned press release, but please, by all means do keep digging, dear. And one never knows… besides the testicle-shrivelling derision the men in his inner circle no doubt served up after all the humiliating publicity, I suppose he could also be mad about some other stuff, like not being as popular or media savvy as the chimp who shares his nickname. Or maybe he wishes the 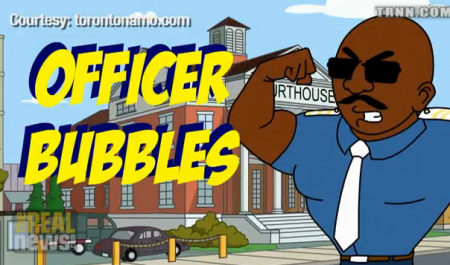 nickname were something more Ibiza-friendly, like “Officer Foamy.” Or maybe he’s just disappointed that his standard issue “Chilean miner“ sunglasses didn’t inspire a more benevolent meme, perhaps in the vein of the “deal with it” dog.

For her part, Winkles – whose Twitter page background features a disappointingly bubble-free “black fist” (there’s a missed opportunity for branding if ever I saw one) – insists the reason for her arrest had nothing to do with the bubbles, but rather the fact that she wore a backpack, had a scarf on and, on the advice of civil liberties lawyers, had a defense attorney’s phone number written on her arm, as did many other activists who were arrested. It’s also important to note that the camera that recorded the interaction was not concealed in any way. During the video, the officers do not address the camera person, and save for one token gloved hand briefly brought up to the lens, no one asks them to stop filming. Josephs’ female colleague, doing her best to be keep smiling while dealing with Winkles, is forced aside when Officer Bubbles decides it’s time to release his Kraken of crabbiness. Heaven forbid the woman be allowed to continue handling the situation without Daddy stepping in and threatening to bring out the belt. 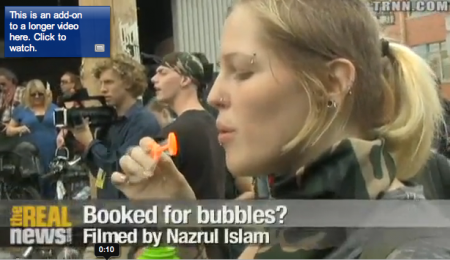 Fair comment laws are slightly different in Canada, and YouTube is no doubt bringing every bit of legal hustle to address this, but it might be more valuable in the long run to choose litigation over negotiation here. Unlike the United States, news websites in Canada are ultimately held responsible for defamatory comments made online, even anonymous comments. Already, media organizations like Thompson Reuters, the CBC, The New York Times and The Washington Post have all begun the move towards disallowing comments that can’t be attributed to real names. But to paraphrase another infamous internet overreactor, “consequences will never be the same if they backtrace it.”

Why isn’t Josephs suing the Toronto Police Department for not giving him sufficient media training to avoid becoming an international laughingstock? Also, why does he even care what anyone thinks of him? We’re “human garbage,” according to the last cache of his Facebook page. And for that matter, why should we care if he feels disrespected? As Constable Josephs himself snarls at Winkles in the video, “That’s terrible. My heart bleeds.” A million bonus points to whichever judge calls back this quote, if and when he dismisses this lawsuit.

Maybe if he were allowed to cry it out in court, YouTube might learn not to jump up and coddle people with takedowns every time a lip quivers. Bubs has way more of a chance with the Canadian legal system than if he’s tried in the court of 4chan, which is already poised to happen. I’m guessing his colleagues at the 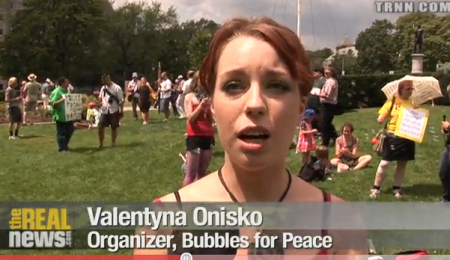 52 have had plenty of laughs at his expense, which more than explains his desperation to get the faceless meanies that “set him up” to look like a clown. I’m certainly not suggesting Josephs would ever break the law himself, but releasing YouTube account holders’ names to anyone with this big an axe to grind (and the whetstone of law enforcement upon which to sharpen it) just seems about as smart as mapping out all the cabin assignments at Camp Crystal Lake for Jason Voorhees.

However, if trainwreck TV has shown me anything, it’s that point-and-laugh is a great exercise for getting rid of floppy triceps. I’m all for letting the dude with the most obvious anger problems I’ve seen in recent memory spit out his soother and be allowed to have as big a hissy as he wants, and I desperately hope there are even more videographers present. And really, in this day and age, don’t we have the technology to rig up an Aneurysm Cam? I’m almost having an aneurysm just thinking about all the entertainment-based uses for that.

But I worry about the future for poor Constable Ragetoon and his tendency towards on-camera apoplexy. Maybe taking this fight public wasn’t the best idea for a newly-minted public figure that’s already on internet notice for being so mind-bogglingly tone-deaf. By drawing more media attention to the case (and risking certain evisceration at the hands of Messrs. Stewart, Colbert et. al.), Bubbeleh has essentially locked himself into a lifetime of gleeful derision at the hands of an increasingly vituperative public (a public that will only grow more defensive of its right to anonymous criticism). Plus, he’s also now guaranteed the entire embarrassing incident will one day be the first line of his obituary.

I hate to burst your soapy sphere, my fizzy friend, but that sound you hear? It isn’t just the mocking laughter of a Schadenfreude-drunk online community that thinks you are getting exactly what you deserve (and will meme you with every tool in its anonymous arsenal to remind you of that), but also a thousand Wikipedia editors rushing to update the entry for the Streisand Effect. Good luck getting the genie – or in this case, the bubbles – back in the bottle.

From English teaching in pre-internet Japan, to voice-over and motion capture work in a video game, to half a dozen years as a children’s hand model in toy commercials for products like Star Wars figures, Barbie and Transformers, Heather Watson‘s life has given her plenty to write about. For the last decade, her work has been featured in both alternative magazines and mainstream media and she is currently Vancouver Editor for BlackBook.