Chris Matthews Not Sure What This ‘Rally To Restore Sanity’ Is, But He’s Going 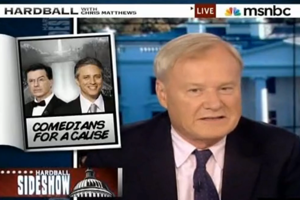 Whether he’s going to support sanity or keep fear alive, count Chris Matthews in on October 30th. In discussing the latest celebrity to jump on the Jon Stewart/Stephen Colbert rally bandwagon, Oprah Winfrey, Matthews noted that few people seem to have a clear idea of what is going to happen on the Washington Mall on October 30th, and with an air of whimsy added, “I’m going.”

Noting Winfrey’s surprise visit to the Daily Show (and the free tickets to Washington, D.C. she handed out), Matthews sounded a bit confused as to what all those people are going to be doing in his neck of the woods, anyway: “for all the buzz, it seems no one really knows what this rally on the 30th of this month is going to be all about.” With that, he confessed, “Well, I’m going.”

While the rally is not entirely considered partisan, the fact that it was born as a reaction to Glenn Beck‘s Restoring Honor rally makes it at the very least somewhat of a left-wing affair, and Matthews has never shied away from being an open Democrat. However, his “I’m going” didn’t sound like he was making a political statement at all but, rather, like he is probably going to drop in to see what the noise was all about. The fact that he announced with subtly on his “Sideshow” segment is an even greater indication he’s not taking this completely seriously.

Even if he isn’t, the fact that Matthews has RSVP’d to the event is notable as some news organizations, most notably NPR, have explicitly forbidden their journalists from attending the rally. Matthews, of course, occupies a different and much opinionated space in the discourse, and it would make little sense for MSNBC to allow Ed Schultz to headline a rally in earnest and not allow Matthews to attend an ironic one.

Watch Matthews’ comments about the Rally to Restore Sanity via MSNBC below: