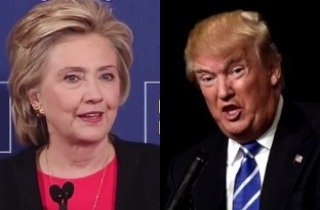 After roughly a year of Hillary Clinton, Barack Obama, and countless liberal pundits and journalists solemnly declaring that Donald Trump was a de facto ISIS propagandist doing their work for them, the media suddenly decided Thursday that accusing your political opponents of working with a terrorist group is off-limits.

Let me begin first with a lengthy tangent: I think there has been a big misconception floating around about what Trump actually said Wednesday. A lot of reporters and commentators seem to be taking Trump’s remarks literally; they think Trump argued that Obama and Clinton literally met with a bunch of bearded men in the Middle East and formed a terror group.

Reading his remarks in their full context (which far too many media reports have lacked), I think it’s clear that Trump was saying Obama is “the founder of ISIS” by virtue of letting it grow in power after withdrawing troops from Iraq.

“Normally you want to clean up [after Iraq]; he made a bigger mess out of it. He made such a mess. And then you had Hillary with Libya, so sad. In fact, in many respects– you know they honor President Obama. ISIS is honoring President Obama. He is the founder of ISIS.”

That’s still a controversial remark that ought to be scrutinized (Trump also supported an immediate withdrawal from Iraq, for one thing), but when I first saw headlines on the remark, I thought he had gone full truther. This Never Trumper really doesn’t think that’s the case.

Many are pointing to Trump’s interview this morning with Hugh Hewitt as proof that his statement about Obama was intended to be literal, after Hewitt tried to contextualize it and got shot down:

HH: I’ve got two more questions. Last night, you said the President was the founder of ISIS. I know what you meant. You meant that he created the vacuum, he lost the peace.

Taken in isolation, that sure sounds a lot like Trump really is being literal. But he goes on:

HH: But he’s not sympathetic to them. He hates them. He’s trying to kill them.

DT: I don’t care. He was the founder. His– the way he got out of Iraq was that, that was the founding of ISIS, okay?

Trump is then even more explicit:

DT: I mean, with his bad policies, that’s why ISIS came about.

DT: If he would have done things properly, you wouldn’t have had ISIS.

DT: Therefore, he was the founder of ISIS.

It sounds to me like Hewitt and Trump are basically talking past each other. They agree that Obama was not the actual founder of ISIS, but that Obama bears some responsibility for the rise of ISIS given his initial inaction and his creation of a power vacuum in Iraq. But to Trump, that makes him a de facto founder of ISIS, while Hewitt disagrees. So when Trump stood by his comments, he was standing by his (admittedly stupid) definition of “founder.”

The “founder of ISIS” charge isn’t so much conspiracy-mongering as it is more hyperbole and loose language from Trump. So to see headlines from outlets like CNN reading “Donald Trump: I meant that Obama founded ISIS, literally” based off the Hewitt interview seems like a disservice to their readers. Trump’s comments were bad, but we can still be honest about why they were bad.

As The Washington Examiner‘s Eddie Scarry points out, Trump has been calling Clinton the “founder” and “inventor” of ISIS for the past seven months, always in connection with her failure to stop the rise of ISIS. This appears to be the first time it was taken literally and turned into a major story. The other times, the press seemed to recognize that it was just an over-the-top rhetorical flourish, rolled their eyes, and moved on.

Which brings me to my larger point: when it comes to over-the-top rhetoric accusing your political opponents of working for America’s enemies, multiple liberals and Democrats have gotten a free pass for exactly the same kind of remarks.

“He is becoming ISIS’s best recruiter,” Clinton said of Trump in December during a Democratic primary debate. “They are going out to people showing videos of Donald Trump insulting Islam and Muslims in order to recruit more radical jihadists.”

Clinton’s remarks raised a bit of the stir at the time, but only because the allegation underlying her rhetoric– that Trump had been featured in ISIS recruitment videos– wasn’t true. While there was a stoic examination of the facts behind her claim, that Clinton was characterizing a major political rival as working for a terrorist organization that murdered Americans went virtually unremarked upon.

There was, to the media’s credit, substantial criticism directed at President Barack Obama when he claimed that those who opposed the Iran deal were “making common cause” with Iranian radicals chanting “Death to America.” But when he (and virtually every liberal pundit taking cues from the administration) claimed with a straight face that Republicans were doing “exactly what ISIS wants” when they recommended taking a tougher stance against the terror group, conservatives cried foul but mainstream media outlets took little notice.

“Donald Trump is the ISIS candidate,” MSNBC’s terrorism expert declared solemnly last month. “Will ISIS Soon Endorse Donald Trump?” asked CNN and the Daily Beast’s Dean Obeidallah in a Mediaite op-ed. “Donald Trump is, in effect, the recruiter in chief for ISIS,” veteran newsman Ted Koppel said on Meet the Press. Over and over again, Trump and other conservatives were accused of being de facto ISIS agents f0r the crime of disagreeing with the president.

I’ll concede that Trump went further than Clinton or Obama did by saying they were founders of ISIS, rather than agents or recruiters. But I’d bet good money that Trump’s comments would have received just as much pickup if he had only called them “footsoldiers” or “backers” or such. The basic principle remains the same.

I end with this thought: this is entirely a mess of Trump’s making. Even if he really, really decided he had to call Obama the “founder of ISIS,” he completely lacks the coherence necessary to even explain himself properly. He can’t then be shocked when his explanation is misinterpreted.

There’s also a reason why so many people immediately assumed Trump was saying Obama was the literal founder of ISIS: because it sounds exactly like the insane conspiracy theories Trump puts forwards every day. It’s the same reason that everyone incorrectly assumed Trump kicked a baby out of his rally. When you intentionally build a reputation as a “politically incorrect” jerk who makes horrifying statements, you can’t then complain when people immediately think the worst of you.

There’s also a boy-who-cried-wolf element at play here. Time and time again, Donald Trump has said terrible, violent, bigoted statements, only to immediately lie afterwards and say the media was taking him out of context. Well now that it’s actually happening for once, who’s going to believe him?