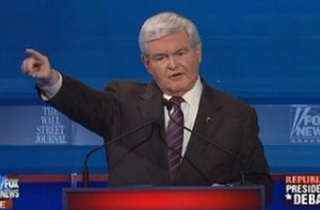 This is a little bit embarrassing, but when I saw Mediaite‘s headline announcing the re-launch of Crossfire on CNN, I chuckled to myself and vowed to look up that Jon Stewart clip again sometime soon, but I didn’t read the post, or, as it turns out, the whole headline. When I saw a Mediaite post promoting a heated debate between new Crossfire hosts Stephanie Cutter and S.E. Cupp, I though “You couldn’t find four sharper elbows to do bloody combat in a political cage match, if that’s your thing.”

Then,  almost two months after it was announced, I caught this hed referencing “Newt’s CNN Move,” and how much Joe Scarborough likes it, and even if it’s too late to do them any good, I have to ask: CNN, have you lost your damn mind?

The rest of the Mediaite-reading world (which is all of it) already knows that CNN has hired the former Speaker of the House to co-host a reboot of Crossfire, along with Cutter, S.E., and Van Jones (I will get to you in a minute, Stephanie and Van). The show itself isn’t a terrible idea, because a lot has changed in the media since Jon Stewart killed it off, and the format is a tidy way for CNN to pick up some POV journalism eyeballs, but their choice of Newt Gingrich is baffling. For a network that often laments how much of its ratings success is beyond their control, they seem to be doing everything they can to mitigate the one area in which they were actually growing their audience like kudzu.

In 2012, CNN grew its black audience by 24%, and promptly jettisoned prominent black journalists like Soledad O’Brien and Roland Martin. The network has come under criticism over its direction under Jeff Zucker, and reports that a Starting Point producer complained that the show’s audience was “too ethnic” surely didn’t help. Dan Lothian has been a White House corespondent for as long as I can remeber, but has consistently been passed over for the Chief White House Correspondent slot, most recently by Jessica Yellin.

But whatever remains of CNN’s black audience, even after anchor Don Lemon spent several weeks agreeing with Fox News’ Bill O’Reilly about the problems of the black community, will surely abandon the network once Gingrich’s mug begins to appear regularly.

In case you  missed it, Newt Gingrich has spent years, and much of the last election cycle, saying the sort of things that the white media generously classifies as “coded racism,” things about “urban” people in “poor neighborhoods” having “no habits of working,” “unless it’s illegal,” and speaking “the language of the ghetto.”

While people have learned that the CNN’s (and other mainstream media outlets) of the world will let white politicians get away with using code words like “urban” and “food stamps” because they’re populated by people with a vested interest in turning a blind eye to it, Newt Gingrich did something remarkable during the 2012 Republican primary campaign: he decoded all of his racism, in public, for the world to hear.

In January of 2012, Newton Leroy Gingrich told the entire black community, not just the ones who sag their pants and litter, but all of them, that they should demand paychecks, and stop being satisfied with food stamps. With his own mouth, in front of TV cameras, he said ““If the NAACP invites me, I’ll go to their convention and talk about why the African-American community should demand paychecks and not be satisfied with food stamps.”

Now, it’s easy to see why such a statement wouldn’t rule him out for a job at Fox, where white guys schooling the black community is a feature, not a bug, but CNN is supposed to be a safe haven from this sort of insanity, an authoritative news network that runs on the jet fuel of respectability. Hiring conservatives and liberals to deliver opposing viewpoints is one thing, but outright racism ought to have no place in that space. At least, it didn’t used to.

The choice of Gingrich is also likely to alienate decent white viewers too, but I mention the black audience for two reasons: CNN was actually growing that audience as recently as last year, and polling indicates that this is a highly engaged audience, ripe for more growth. If decency doesn’t do it, surely dollars will. It’s not too late for CNN to dump Newt Gingrich, on the off chance that they just missed this fat section of his resumé, because trust me, huge numbers of potential viewers did not. Also, it’s not too late for Stephanie Cutter and Van Jones to refuse to share a studio with this guy. There are better ways to make a living, as I’m sure Newt will be the first to tell you.