Creating A Media Personality Out Of A Media Figure: Emma Gilbey Keller’s Essay On Bill Keller 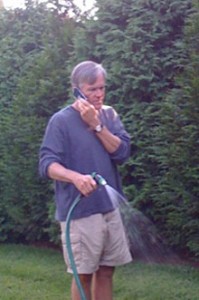 In case you were wondering what the wife of the soon-to-be-former New York Times executive editor Bill Keller thinks about his resignation (And who hasn’t?), Vanity Fair is here to help. The magazine gave Emma Gilbey Keller a bit of real estate to write about how her husband’s occupation has impacted life her life as well as those of their two daughters, Alice and Molly.

This—this knitting of headlines and family dramas—has turned my memories into a composite of what’s happened both inside and outside of our house. Four years ago this month, I remember standing in a Long Island field, watching Alice ride as I dialed Bill in South Africa. He was there with Molly, and they were waiting to meet Nelson Mandela—but the purpose of my call was to tell Bill his mother had just died.

We did go to India this past March, and the Times reporters were released. We celebrated the news with a raucous dinner in Delhi, before going back to the hotel—and back to the “news” that Molly had food poisoning. She missed seeing the Taj Mahal, as she was too ill—but she did become Twitter buddies with India correspondent Lydia Polgreen.

Which would you rather?

I suppose Vanity Fair readers might be the sort to be interested in the family life and personal musings of Bill Keller and his wife, as well as the type of readership for whom someone like Keller is something of a celebrity, his personal life being as newsworthy as his professional choices.

I’m not a Vanity Fair reader so while I understand, somewhat, the interest, I find Gilbey Keller’s piece indicative of something that troubles me about those in media, even though, by covering it, I’m a part of the problem. The angst!

The fact is that Gilbey Keller’s piece, while interesting and moving, sure, isn’t just one wife’s look at her husband’s work and its impact on their family. It’s a piece about a well-known man with a well-known job whose family is now also known.

While it is pleasant and satisfying and sometimes even educational to be able to glimpse into the lives of others – especially people who have the opportunity to travel to exotic locales where their children can contract food poisoning someplace other than the Muncie, Indiana Best Western – that’s not all that’s playing out in this particular article. The article also acts as a move that, whether calculated or not, serves to bolster the idea that those in the media, like Bill Keller, are included in our nation’s ever expanding definition of celebrity. That way, when they churn out articles about, say, how they think Twitter renders a person stupid or when they cast judgment on other news sources or even when they seek to malign this nation’s most beloved past-time – the rabid consumption of kitten videos – they do so from a position of knowledge and authority. And while I’d be somewhat keen on learning about Keller’s take on, say, running a paper, I’m not sure I’m particularly interested in his personal musings about a social network tool he, apparently, refuses to use to its full newsgathering potential. That is, I’m not interested in such an article beyond how it 1) reflects on his (and it was, indeed, “his”) paper’s reporting and 2) acts as an ironic and most likely highly calculated means of giving his New York Times column even more attention across social media platforms.

While my fellow Mediaite editors and I cover (and, for the most part, relish in covering) the fallout from the media industry’s and political sphere’s most bloated egos, it rings hollow to attempt to fashion an editor of a paper devoted to presenting “all the news that’s fit to print” as a personality in his own right – with his family and his oddly personal attacks on fellow media figures also playing a part in his celebrity.

I don’t necessarily want to know Bill Keller’s, nor new executive editor Jill Abramson’s, political leanings. That shouldn’t factor into the paper’s coverage, nor in the journalism of its individual reporters. And I don’t care much to hear either wax on about their thoughts regarding social media, particularly since I should be able to tell this from the manner in which their paper and web properties utilize or fail to utilize outlets like Twitter. I want the product to speak for itself, regardless of the person behind it.

Still, it would be cool to be able to tell people that my daughter happened to be Twitter buds with India correspondent Lydia Polgreen.

Of course, now that Keller can write op-ed pieces freely without carrying the weight and reputation of the paper on his shoulders, I’ll be more open to his musings. While probably vehemently disagreeing with his take on most things related to the changing ways we consume and share media.

Photo and excerpts via Vanity Fair