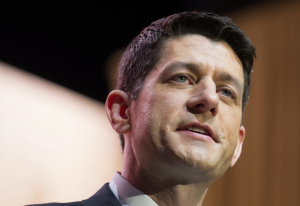 Desperate GOP Begs Paul Ryan To Save Them All

The Republican party is pretty desperate these days, huh? And with these kind of numbers, you can see why:

– Only 31 states have GOP governors, compared to 18 states for Democrats (an Independent, Bill Walker, runs Alaska these days)

– Only 247 Republicans are currently in Congress, compared to 188 Democrats

But alleged desperate times call for alleged desperate measures, particularly after you lose such an elegant yet powerful presence (sarcasm meter…11 and climbing) that is Majority Leader Kevin McCarthy as Speaker by his own hand. From this perspective, the awkward, uninspiring McCarthy dropping out isn’t much different than the Democrats losing the electricity that was Lincoln Chafee. In other words, it’s actually very, very good for the GOP that McCarthy won’t be one of its most prominent faces leading up to this election… because as the preview showed leading up to his coronation, he simply isn’t ready for the Big Boy chair. And really, all that was lost was a few weeks more of John Boehner at the helm, a guy no one was expecting to drop the bomb he did in announcing his pending retirement last month anyway.

Yet… we keeping hearing from many in political media that the party is in dire straits, or desperate. This can be agreed on: The GOP does need a true leader, does need a central figure herding all of these cats. Truth is, the party has been a rudderless ship for some time now. Someone with gravitas and respect was needed. And the way Paul Ryan has gone about this process has been one from a position of leverage: Building relative consensus with the Freedom Caucus (which many said couldn’t be done) and laying down expectations around work-life balance (having lost his father at a young age, he understands the importance of being there for his children).

We keep hearing about from the Becks and Levins and AM radio in general that Ryan is the wrong guy for the job. But given this is arguably the toughest job in politics right now (inheriting a Congressional approval rating of 10 percent can’t be good), you’re always going to have people with different opinions. Ryan’s job will be to unify — and he’s already showing he can — at a time polarization is all the rage, and to, you know, actually pass legislation. All of that said, if there’s another name out there who is more qualified in this regard, feel free to share in the amiable, never-repetitive-or-anything comments section below.

So if the desired end result is Ryan getting the speakership and unifying the party going into an election that could give it control of all three branches of government in 2017, isn’t everything that transpired over the past few weeks starting with McCarthy’s announcement to drop out only a good thing?

“We need to move from being an opposition party to a proposition party,” Ryan explained yesterday. “Because we think the nation is on the wrong path, we have a duty to show the right one. Our next speaker needs to be a visionary one.” This isn’t some poll-tested plea Ryan is throwing out there… this has been his theme for years.

We keeping hearing about a party in disarray. But the resounding victories keep coming in the Congress, in the Senate, on the state level. The presidency is the biggest prize, of course, and that has eluded this party with blowout electoral losses in each of the past two elections.

But candidate Clinton is no candidate Obama. They shouldn’t even be in the same sentence or stratosphere, and is an immensely beatable candidate given how little voters of all stripes trust her on anything.

An easy argument against the GOP asked by political pundits going into this election would be this: If you can’t govern yourselves, what makes you think you can convince the American public you can govern the country?

It’s a sound argument and made for TV, particularly in campaign ads and on Sunday political panels. Paul Ryan can help change the answer.

If this is what so-called desperation breeds, is it really such a bad thing?