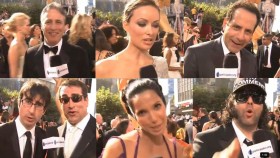 Today we launch a new column: Do-Gooder, which will highlight all sorts of do-gooding initiatives by the kind of people who oughta be inscribed in The Book of Life on this Yom Kippur. I love this under-the-radar video from the Emmy red carpet, where director Jason Pollock asked Emmy-goers to step up and pledge their participation to public service in the name of iParticipate, a public-service initiative from the Entertainment Industry Foundation meant to encourage and promote service and volunteerism (that’s Michelle Obama kicking it off). The collection of people proclaiming “I participate” here is pretty awesome, and sets a terrific example — fan faves no doubt include Jon Stewart and Stephen Colbert, but there’s also John Oliver and Rob Riggle, Tony Shalhoub, Sally Field, Padma Lakshmi,that Olivia Wilde that everyone’s so gaga for, Billy Bush, Ed Helms, Kate Walsh, Larry Wilmor, a towering and beefy Jimmy Smits, Dianne Wiest, Kevin Kline, Adrien Grenier, Phyllis and Angela from The Office, and Judah Friedlander as the French say, en chapeau.

Watch it here — there aren’t even secret coded message for people to get mad at! Maybe…

Here’s a bit more on the project from the YouTube page:

Starting October 19th, EIF, Hollywood’s leading charity, has enlisted the four major broadcast networks — ABC, CBS, FOX and NBC — for an unprecedented, week-long television event. As the centerpiece of EIF’s iParticipate campaign, for the entire week of October 19th, these and other networks will use our favorite TV shows to shine a spotlight on the power of service. Over sixty prime-time shows have already agreed to participate and this number is growing…I participate, do you?

your mom participates and i﻿ did her