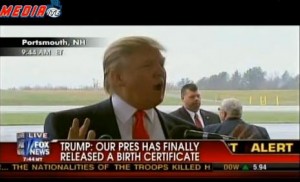 While Ed Schultz‘s declaration that Donald Trump is “a racist” might still be an overstatement, Trump wasted little time in making Schultz look like a genius. In a press conference about President Obama’s release of his long-form birth certificate, Trump blew hard on the dogwhistle, saying that Obama should “get off the basketball court,” and later called Confederate rebels “wonderful,” “beautiful,” “romantic,” and “great.”

Speaking about the recent sharp rise in oil prices, Trump said “(Obama) said ‘There’s no control over prices,’ which he does if he gets on the phone, or gets off his basketball court.”

Seconds later, speaking about his suspicions that the Libyan rebels are controlled by Iran and al Qaeda, Trump said, “We make them sound like they’re out of Gone With the Wind, they’re wonderful, the beautiful rebels, it’s so romantic, they’re great.”

On its own, the basketball thing might be a reach, but in context with other attacks on Obama’s love of the game, along with the fact that he apparently spends much more time on the golf course, it’s difficult to dismiss.

What makes it impossible to dismiss, though, is Trump’s accompanying praise for Confederate “rebels” as “Wonderful,” “beautiful,” “romantic,” and “great.” Trump is either more Clueless than an Alicia Silverstone/Amy Heckerling film retrospective, or he’s blowing harder on that dogwhistle than the Buffalo Bills blow in the Super Bowl.

Update: A glitch in the Mediaite CMS is for some reason, not publishing this story with a “columnist” heading, as it should be.

Here’s that portion of Trump’s presser, from Fox News: