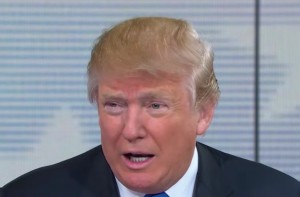 Republican presidential candidate Donald Trump is set to announce a new immigration policy dedicated to stopping radical Islam Monday. Details are still sparse, but the brunt of it is that new migrants will now be screened for beliefs that go against “American values.” According to reports from the AP and The New York Times, immigrants will be screened for their “commitment to the ideals of ‘tolerance’ and ‘pluralism,’” and their beliefs “on issues like religious freedom, gender equality and gay rights.” It isn’t clear yet whether this new policy is supposed to supplant his Muslim ban, or buttress it.

Let’s get the obvious point out of the way: yes, a ban on those who don’t believe in tolerance and pluralism would probably keep Donald Trump himself from entering the country. Self-awareness has never been his strong suit.

Luckily Trump will never have to face the test he proposes, by virtue of being white and allegedly Christian. His religious test is only for people from certain countries and who follow certain religions that Trump’s base hates. But even if it were applied equally across the board, the effect would be to block many of the immigrants this country needs the most.

Many are surprised to learn the highest-educated immigrants to the United States tend to be Africans, not Asians. 58% of Nigerian immigrants for example have bachelor degrees or higher, including a whopping 28% with graduate degrees. Both figures are more than double the general U.S. population.

It’s hard to define “tolerance” or “gay rights” in a way that wouldn’t ban nearly every Nigerian from entering the country. Half of Nigerians are Christians, the other half Muslims. Regardless of whether Trump decides to police the speech of all or the speech of only Muslims, the net result would be to rob us of thousands of capable doctors, lawyers, artists, students, priests, engineers, and professors.

There actually is a strong precedent for limiting immigration based on troubling ideological beliefs: we banned communists during the Cold War, and anarchists and fascists before that. But the justification for those bans was that those ideologies explicitly called for the violent overthrow of democratic rule. Political and religious beliefs have never been banned by virtue of being merely unpopular.

Accordingly, the United States can and does screen immigrants for potential terrorist sympathies. But one can believe that homosexuality should be outlawed, that apostates deserve death, that women should cover their head, that men can take more than one wife– or any host of beliefs that most Westerners find abhorrent– while still respecting rule of law. Defined broadly enough, a large majority of Muslims worldwide are “radical” by U.S. standards. A fraction of a fraction of a fraction of those Muslims are violent terrorists.

What it essentially amounts to is this: Donald Trump wants to ban people from this country who have done nothing wrong other than think differently than he does. He would codify certain beliefs about women, gays, etc. as politically correct, and the politically incorrect would be discriminated against. Oh, and by the way, most of those politically incorrect beliefs will end up being constitutionally protected religious beliefs.

The great hypocrisy is of course that pro-Trump conservatives would go ballistic if President Barack Obama ever proposed banning those who show insufficient “tolerance” towards women and gays. And justifiably so: conservatives recognize that a certain class of activists tend to use “intolerance” as a shorthand for disagreement with liberal orthodoxy. Opposition to abortion, support for religious freedom laws, even disinterest in seeing the new Ghostbusters: all “intolerance” warranting immediate firing, bans from college campuses, and public shaming and silencing.

But too many of the conservatives who readily recognize the corrosive and dangerous effects of political correctness when directed at them are more than willing to use it as a cudgel against those they despise. They aren’t actually interested in the intellectual underpinnings that lead liberals and conservatives alike to cry foul about government policing of speech. They just want the rhetorical cover to spout beliefs that others find offensive. Like nearly every anti-liberty policy embraced by Trump supporters, their belief in classical liberalism goes only as far as it aligns with their identity politics.

Well, even if their opposition to political correctness extends only so far as their self-interest, all conservatives should oppose the precedent Trump is setting. Hillary Clinton has openly voiced the opinion that “deep-seated religious beliefs” in opposition to abortion and gay marriage “have to be changed.” You really want to give future Democratic administrations the unilateral power to police people for religious beliefs they find abhorrent? News flash: they find your beliefs abhorrent.

The ultimate irony is that in their quest to keep “creeping sharia” out of the United States, the Trump crowd would become that which they hate the most: intolerant, censoring bigots using force to crush the nonbelievers. The thing about government thuggery is that while it sure is fun when you’re the foot, I don’t think they’ll like it when it’s their turn to be the face.