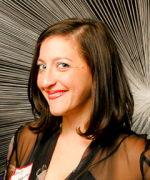 Emily Gannett is tireless. I know this because I have traded emails with her at 2 a.m. only to later wake blearily to a chipper morning missive sent south of 6 a.m. before her morning run. She’d be that woman of whom people say “I don’t know how she does it” even if she didn’t regularly run marathons. As the co-founder of KlickableTV and now of IRL Productions, interactivity has always been her bread and butter, and she intuitively understands how to merge brand identity with cutting-edge user experience, both on and offline. (This Foursquare pool party? She can take the credit. You’re welcome, ladies.) Launched with a splash during New York Internet Week 2010 this past June, IRL Productions has become the go-to for high-end, super-buzzy launches and events, including tonight’s Business Insider SAI 100 party on the floor of the New York Stock Exchange and Ralph Lauren’s “Big Pony” collection fragrance launch, which featured a much-tweeted gourmet dinner based around the ingredients in the four scents (disclosure: I was there, and may have been responsible for the rogue hashtag, “#ridethepony“).

One more disclosure: Emily is also my partner in Change The Ratio, an endeavor we co-founded to improve visibility, opportunity and access for women in new media and tech. (See last week’s event with USV’s Fred Wilson.) So if you were expecting something objective here, you’re out of luck — never mind that we’re in the trenches together, she’s also the one who organizes all our events, which inevitably include both food and drinks. But more to the point, I see her in action, which is how I realized that she was not only an insane multi-marathoner who knew how to deploy an army of influencers and snap her fingers to get cases of free product delivered, but a creative mind who understood how to enhance experience through interactivity, with high standards and no compromise. She’s also a great example of how quickly brands are built these days: IRL launched officially in June, and is now a go-to in the space. Through it all she’s run one marathon, one half-marathon and is training for the New York marathon (on an all-star team with honorary captain Usain Bolt – yes, that Usain Bolt) and wrangled countless cases of Pepsi products toward the greater good. I figured that if she didn’t love her work then she was some sort of masochist — which means that either way, she’s perfect for this column.

You love brands – mixing and matching them, partnering them up with startups, integrating product placement into a party, weaving stories around them, integrating them (literally!) into real life. You are wonky about them the way nerds are wonky about Star Wars. For many people, brands are the logo in the background that should sit quietly and be grateful for writing a check. How did you come to be such a brand enthusiast, and how did that morph into establishing IRL?

My background is in product placement — I used to work for the movie studios where I would find brands for their feature films. I loved finding organic ways to integrate brands into the film’s narrative. The most effective placements are ones that part of the content or the experience…not just a brand logo on screen. Movie studios need brand support to produce movies so it’s important to recognize what the win is for both sides (content producers & brands) and then to come up with integrations that make sense.

IRL was established because we realized the most meaningful connections and resonant experiences take place in real life. We realized that brands can be part of the story by leveraging the power of face-to-face with emerging technology platforms & social media.

Nowadays it seems like brands whoosh into being in weeks. (Chatroulette – Groupon – The Tea Party). What’s the trick to establishing a brand with a name that has social currency?

Partnerships. I see the most growth in brands that are willing to experiment. The Foursquare/Pepsi relationship is a great example of a successful partnership between a publisher and a brand. Pepsi identified a future trend, became an early adopter and the press took note.

Speaking of Pepsi, they have been a huge supporter of the new media and tech scene in NY this past year.
Especially, Bonin Bough who was the first to get behind two organizations that I’m involved in, SoundCtrl and Change the Ratio. Their sponsorships made perfect sense considering their larger campaigns like Pepsi Refresh, PepsiCo Promise and the PepsiCo10. I think they really demonstrate that supporting innovation and social causes is a top priority.

What do you find the most stimulating – and the most exasperating – about entrepreneurial, start-up culture? (Not just being in it yourself, but working with them on events and promotions.)

Bringing people together face-to-face to provide awesome, unique experiences worth sharing. I also love technology and being part of the start-up scene in NY. IRL is all about “real life” but we leverage digital platforms to spark and extend these conversations and many times these are our friends’ emerging platforms like, Brooke Moreland and Ashley Granata at Fashism and Dennis Crowley and Naveen Selvadurai at Foursquare.

Entreprenueurs are always wearing many hats… they’re used to doing it all and juggling many things at once. There are so many people, brands and vendors involved in each project and its challenging trying to track people down to get answers. I usually try meet with people IRL. Face time encourages people to put down their ipads and iphones and answer my questions ;)

So – what’s the difference between working for Harvey Weinstein at Miramax and starting a brand-new startup? That is to say, which is more stressful?

Ha. Well, I think my greatest strengths are probably resilience and resourcefulness, and both have served me well in working at Miramax and at my own startups. At Miramax, I worked long days with a lot of people working at their maximum capacity and sometimes in fear that they would disappoint their boss. It was long days and very stressful – knowing what they want but trying to figure out how… and that’s where I think I

developed my resourcefulness. For instance, what do you do when someone tells you to get a script to an A-list actor at 9 p.m. on a Friday night? And it needs to get there now? You just figure it out… (Not going to tell you the tricks but let’s just say, it got done.) (Ed. She won’t let me say who it was, but I can at least tell you that he’s super-hot.)

That experience translated nicely to starting KlickableTV. We had never started a company before and there was a huge learning curve but you know what — you figure it out, while still keeping yourself together.

What do you consider “work”? Clocking in and out of an office? Morning runs with @Caro (CNET’s Caroline McCarthy) and @Naveen (Foursquare’s Naveen Selvadurai)? Drinks at Tom & Jerry’s with people on your cc lists? (Or, put differently, do you distinguish between social and the professional?)

I guess I’m always, “on” which I guess which could be seen as a bad thing but I think its part of being an entrepreneur. It’s really hard to turn off your brain or segment your life like that. I run with Naveen and Caro because they’re friends and I enjoy spending time with them but it doesn’t hurt to be the first one that knows what Caroline is covering on MSNBC that morning or that Naveen is in a national Gap ad, right?

You also run with them because you’re all raising money for Camp Interactive, along with a bunch of other social media stars. You make a point to pair a non-profit, social-media-for-social-good element to your events. Is that something you have to cajole clients into or do you find it’s an added feature?

Yes, we always try to incorporate social good into our events. I haven’t worked with anyone who needs to be cajoled and to be honest, if I do have to do that… I don’t want to work with them.

You are a crazy person who relaxes by running marathons. (Sorry. You know I think you are an impressive crazy person!) Draw parallels between that kind of intensive training and building a startup in 2010.

I don’t know if I get relaxed from running marathons but I do get a lot out of training for them. The pressure of building a company is crazy stressful and I need the physical exercise daily to keep me sane. I’m training for the New York marathon now… raising money for a great charity called Camp Interactive. You can donate via CrowdRise here.

Running the marathon is actually the easy part… the hard part is the other stuff: being really conscious of what you’re eating, drinking less, scheduling 3 hour blocks of time for long training runs, leaving the party early to get more sleep. It takes tremendous drive and discipline, just like starting a business.

I can’t believe this is my 8th marathon. I’ll never forget what my dad said to me when I crossed the finish line the first time… “See Emily, now you know, you can do anything.” And you know—I believe him.

What pushes you through that last mile?

I guess it’s that resilience thing again… I say to myself its ok to hurt, you’ve been here before and you didn’t die. So I just push through and court the pain because I know it’s almost over and then I can have pancakes.

This post was reprinted with permission from Rypple.com and its “I ♥ Work” series.

Photo credits: All photos courtesy of IRL Productions; Social Climbing photo courtesy of Erica Gannett for IRL Productions; nautical-themed photo from Stoli’s Thrillist Hamptons Anniversary party; all pilfered from Emily’s Facebook page, except for the Twitter screengrab. It was a great party.