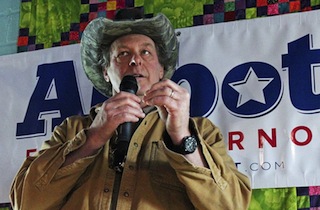 Why Ted Nugent is a cause celebre for the right wing is not hard to fathom: he has the sub-militia bona fides that appeal to an out-of-power party enamored with revolutionary rhetoric and independence measured by the acre, and his bellicosity can be mistaken by sympathetic parties for fearlessness. The question raised repeatedly this week — “Why does Ted Nugent get so much coverage?” — kinda self-answering.

The more intriguing question, just now starting to be voiced on the right, is why are viable Republican politicians allowing him to get this exposure? This is what conservative columnist Richard Greene would very much like to know:

Since Abbott is ahead in the polls and already assured of getting the votes from Texans who like the plainspoken country music rocker, you have to wonder why he took the risk that landed him in hot water last week.

Most speculate that the attorney general’s strategy was to pump up his core supporters. I’m uncertain if that outcome has been achieved, but it sure seems to have handed Davis a welcome opportunity to rally hers.

Both good points. The Wendy Davis campaign has been on a months-long slide that has belied its candidate’s inexperience; now, suddenly, it is Abbott who appears the novice, as he struggles to articulate a response to Nugent’s comments while giving Davis’ defense a much-needed breather. “Abbott’s campaign stumble put Davis’ tortured explanations of how she has defined, redefined and defined again her positions on critical issues in the rear-view mirror this past week,” Greene writes.

This is doubly befuddling as nobody who would be swayed by Nugent would have voted for Davis in a million years; his presence likely didn’t earn Abbott a single vote. Abbott had everything to gain from holding back and letting the Davis campaign defeat itself. Ted Nugent is the opposite of holding back.

Matt Lewis is equally perplexed at the Daily Caller. Lewis understands why conservaties are rallying around Nugent amidst the controversy — he diagnoses an almost pathological tendency on the right to unite with the enemy’s enemy — but he doesn’t sound at all sure what Nugent was doing there in the first place.

Lewis, and Alyssa Rosenberg with him (how often do those two agree?), sees the right as being starstruck, a problem when your political party attracts so few stars: “Nugent is beloved partly because conservatives are so desperate for celebrities that they are (ironically) enamored of them,” Lewis writes.

That’s all well and good when Nugent is your prank guest to the State of the Union. Perhaps Abbott felt he was so far ahead in the polls that he could afford a prank. It’s doubtful his campaign feels that way now. And it’s all the more likely that when a politician next suggests inviting Ted Nugent to a campaign stop, her campaign manager will take a deep breath and ask, “Why?”