Eyeborg: “The Age of the Post-Human is Coming Soon”

Eyeborg: “The Age of the Post-Human is Coming Soon” 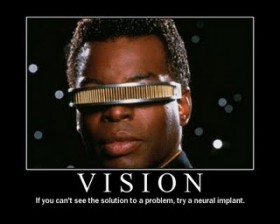 There’s a story that has been going up lately about a bionic eye that MIT is building. Whenever there is news about bionic eyes I get the link from friends and others who know about the bionic eye I am building.

They are actually quite different. My bionic eye is a prosthetic eye retrofit with a small wireless video camera. There is no vision restored or any surgery. The kind MIT is building is a video camera on a pair of glasses that sends data to a chip that stimulates the retina and the optic nerve. MIT’s bionic eye is for people who are blind, whereas mine is for people missing an eye…or willing to have an eye removed. Ashton Kutcher did mention he might be into that on a Twitter post a while ago.

People often think I should combine the two technologies and send some visual data to my optic nerve. I have to say though, after five eye operations (and losing the left eye) I don’t want any more scalpels in there. Thoroughly unpleasant! And even if I did it would totally screw up the vision I still have. The vision that blind people can currently achieve with variations of this design are, at best, like a monochromatic Light Brite (remember those?) with sixty pixels. Sending a video signal from a prosthetic eye camera to my retina/optic nerve would create a confluence of garbled black and white low pixel images along with the perfectly good vision I get from my remaining healthy right eye. I only lost fifteen per cent peripheral vision. And yes, I can drive and, yes, I can play squash. So, won’t be doing that for a while.

Check out these videos to see what I mean about the kinds of images possible now.

Eventually, though, I think the two kinds of bionic eyes can come together. The one I am making (along with young engineer Kosta Grammatis), and the kind many teams, including MIT, around the world are working on very well may combine in the future. Instead of attaching the camera to glasses they will just replace the eye with a prosthetic. The age of the post-human is coming soon, where we decide to augment and replace parts of our body. I might even have a conversation someday with my unborn future kid along the lines of: “I don’t care if I replaced my eye, you cannot have your eye removed and replaced with the new iCamera! When I did it it was different!”

You think I’m joking but I’m not. It’s not like we aren’t already okay with replacing body parts. I don’t know too may Hollywood actresses with their real boobs anymore, and as if your iPhone isn’t almost already part of your body. So in the end, I couldn’t blame a child if they want to get their own post-human eye replacement. And boy will it be neato when they do. It’ll probably have augmented reality on it. (See more about that in Ash Kalb‘s Mediaite column here.) There’ll be additional info like where to find the closest Starbucks, thermal vision, the heart rate of who you are talking to, telescopic capability, night vision, facial recognition for when you can’t remember someone’s name, your email, you’ll share your “live view” on Facebook!

Sounds like science fiction, right? It’s coming. Trust me. I talk to nerds in the know about this stuff all the time. It’s going to get weird. It already is.