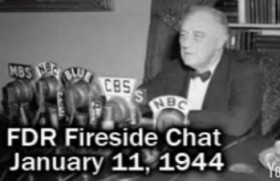 One of the more amazing revelations in Michael Moore‘s new film, Capitalism: A Love Story, is his discovery of long-buried archival footage of Franklin D. Roosevelt detailing his planned but never enacted “Second Bill of Rights,” calling for guaranteed a Second Bill of Rights that recognizes “economic truths [that have] become accepted as self-evident” — the right to a job, a home, adequate health care, and an education. There has been — and will no doubt continue to be! — debate about what this Second Bill of Rights would have led to and whether it was a brilliant or terrible idea, or still is. Nevertheless, Moore discovered a pretty important bit of history lurking in a film archive, and FDR’s opinion still carries weight, so this will be discussed. To that end, we’ve collected the audio and text here for your reference.

p.s. This is the line which got applause in the theater: “For unless there is security here at home, there cannot be lasting peace in the world.”

Excerpt from President Roosevelt’s January 11, 1944 message to the Congress of the United States on the State of the Union:

It is our duty now to begin to lay the plans and determine the strategy for the winning of a lasting peace and the establishment of an American standard of living higher than ever before known. We cannot be content, no matter how high that general standard of living may be, if some fraction of our people—whether it be one-third or one-fifth or one-tenth—is ill-fed, ill-clothed, ill-housed, and insecure.

This Republic had its beginning, and grew to its present strength, under the protection of certain inalienable political rights—among them the right of free speech, free press, free worship, trial by jury, freedom from unreasonable searches and seizures. They were our rights to life and liberty.

As our nation has grown in size and stature, however—as our industrial economy expanded—these political rights proved inadequate to assure us equality in the pursuit of happiness.

We have come to a clear realization of the fact that true individual freedom cannot exist without economic security and independence. “Necessitous men are not free men.” People who are hungry and out of a job are the stuff of which dictatorships are made.

In our day these economic truths have become accepted as self-evident. We have accepted, so to speak, a second Bill of Rights under which a new basis of security and prosperity can be established for all—regardless of station, race, or creed.

All of these rights spell security. And after this war is won we must be prepared to move forward, in the implementation of these rights, to new goals of human happiness and well-being. America’s own rightful place in the world depends in large part upon how fully these and similar rights have been carried into practice for all our citizens. For unless there is security here at home, there cannot be lasting peace in the world.