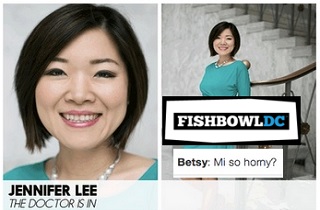 The disturbing recent trend of casual anti-Asian racism continued yesterday when FishbowlDC’s Betsy Rothstein cracked wise about Dr. Jennifer Lee, number 25 on The Hill’s 50 Guaranteed Clicks Per Friend Or Family Member slideshow, who is also Special Assistant for Community Engagement at Veterans Health Administration, a part-time ER doc, and a White House fellow. In their sendup of The Hill’s “Most Beautiful” list, FishbowlDC’s panel assessed the good doctor this way:

Peter: I’ve been instructed not to touch this one.

Anonymous journo: “The doctor is in”? Okay, but only if she’s wearing a glove.

Justin: Dermatologist, right? That is some porcelain skin. 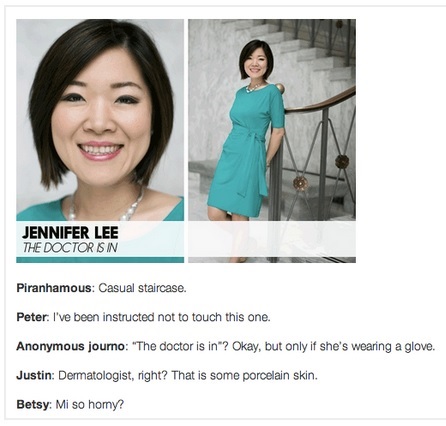 In case you’re wondering, it’s unlikely that Rothstein will apologize, mainly because she said so in the intro to their piece:

Here we offer our raw reviews of the beauties – FishbowlDC style. Warning: To the easily offended (you know who you are) you might want to skip this because we won’t apologize.

They will, apparently, stealth-correct, as the entry in question now reads:

Peter: I’ve been instructed not to touch this one.

Anonymous journo: “The doctor is in”? Okay, but only if she’s wearing a glove.

Justin: Dermatologist, right? That is some porcelain skin.

Betsy: I wonder what kind of moisturizer she uses.

The change is not noted on the page at this time. Betsy Rothstein hasn’t returned a request for comment as of this writing.

Race has become central to the media narrative surrounding the trial of George Zimmerman for the killing of Trayvon Martin, for which Zimmerman was acquitted, but while black/white relations have played out in the news, a pattern of casual anti-Asian racism has developed in the past few weeks. When a prank caused news stations to read false names of the Asiana Airlines flight crew that was involved in a crash last month, it seemed everyone had a few Asian name jokes at the ready.

Viewers of CBS’ Big Brother live feed have been treated to a steady stream of racially offensive comments this year, but the jabs at Asian contestant Helen Kim are frequent, and the ones most likely to be greeted with approving laughter from the other contestants. Just a few days ago, CNBC reporter Robert Frank repeatedly used the phrase “a chink in the armor” in discussing the divorce of Wendi Deng from Newscorp honcho Rupert Murdoch, while a Los Angeles rock band incurred the wrath of the internet with its hyper-racist Asian Girlz video. They say that three makes a trend, but Betsy Rothstein’s crack makes three this week.

Aside from the racism, this pattern shares something else in common with the post-Zimmerman-verdict cultural conversation: the normalization of certain levels of racism. The contestants on Big Brother clearly don’t see their cracks about rice and nails as risky, just as Betsy Rothstein didn’t see her 2 Live Crew reference as a problem, just as Day Above Ground are sincerely convinced that their sexually violent package of tone-deaf stereotypes isn’t racist.

Update: Stealth-edit or not, FishbowlDC is true to their word not to apologize, or even to be privately apologetic, as evidenced by this Twitter exchange: