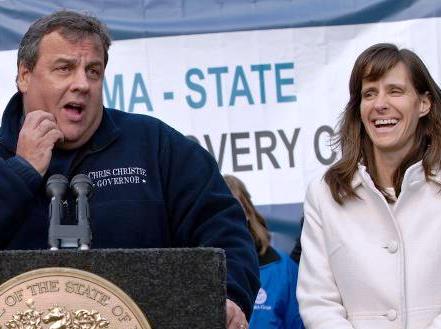 It was my adopted hometown for 16 years. I lived with a high school friend on Washington Street, then on my own on 7th Street, then with a (now-ex) girlfriend on Willow Avenue, then with a girl (platonic), also on Willow, then on my own on Park Avenue (which sounded cool at the time), then with my fiancé on Jefferson Street before hightailing out to the suburbs last July once an impending addition to the family made apartment living less desirable.

During my time there, I saw not one, but two mayors go to prison, including one guy from my actual hometown (Wayne, NJ) who lasted in office about 24 minutes before getting arrested for taking bribes. So when Dawn Zimmer came along—a wife and mother of two who had served on the City Council for only two years—she seemed like the kind of pseudo-outsider the town needed to keep rampant corruption at bay.

Local media—particularly one awful local political blog who supported another candidate—smeared Zimmer during the 2009 campaign relentlessly and on a very personal level. Seeing this blatant abuse by an outlet that did have some influence locally, I stood up for Zimmer again and again in my own publication (RIP, RealHoboken.com). Simply put, she was exactly what Hoboken needed to restore the dignity of a proud city. She won relatively easily when few doubted she could even compete, and she won re-election last year.

So it was obviously sad for me to watch Dawn on MSNBC Saturday contradict herself at every turn in regards to her allegation of being threatened and “held hostage” by the Christie Administration over Hurricane Sandy funds. I was very familiar with Sandy, by the way, as it entered my ground level apartment but thankfully didn’t destroy the place.

Regardless of what side of the aisle you’re on or whether you believe Christie had anything to do with the George Washington Bridge scandal or not (polls statewide have shown the Governor suffered little damage in terms of approval, standing at 59 percent in a recent Monmouth University/Asbury Park Press poll, for example), sometimes the only way to look at a he said, she said situation is by examining hard evidence and facts, if available.

In the case of Zimmer vs. Christie, here’s what we have:

1) Tweet after tweet (after tweet after tweet) illustrating Zimmer’s approval of Mr. Christie’s handling of Sandy days, weeks, months after the storm. One reads this kind of praise and adoration from the Hoboken Mayor and it keeps prompting the same question (which few in the media are asking): If Zimmer had such a problem with Christie, if she was actually threatened by two different high-ranking Christie officials, why continue to offer such public praise and be such a big proponent of the Governor? 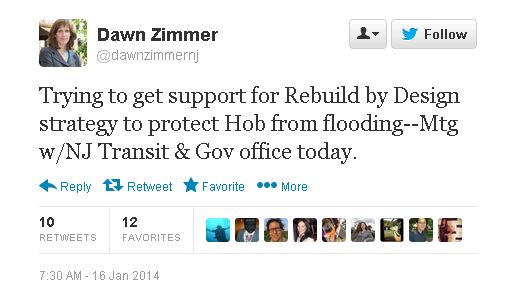 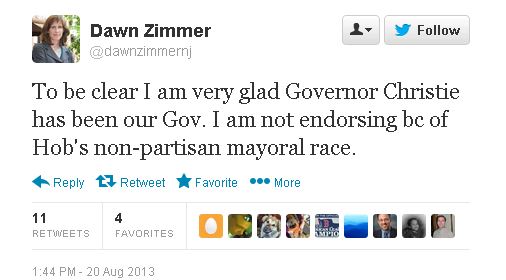 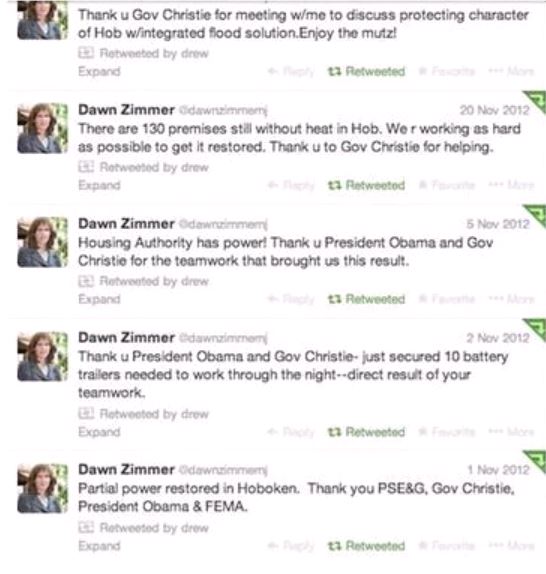 2) Christie won big in last year’s gubernatorial race against Democrat Barbara Buono. The campaign season leading up to Election Day—which occurred long after Sandy funds were allocated throughout the state—was another chance for Zimmer to demonstrate her disdain for the man she now says “brought her to tears”—by endorsing Buono. Zimmer’s a Democrat, so said endorsement wouldn’t exactly be a huge stretch—particularly for a Hudson County politician, where nearly every elected official is blue and true. But Zimmer chose not to endorse Buono. Again, why?

3) Zimmer has produced a diary entry (which any lawyer would argue could have been written at any time) that includes a note about Christie being cut “from the same corrupt cloth that I have been fighting for the last four years.” But in today’s day and age, you’re telling me there isn’t one person—including Zimmer—who can produce something a bit more verifiable in the form of a simple email? During this entire episode, there has to be some kind of correspondence between Zimmer and anyone…elected official, cabinet member, friend…who can come forward to show how Zimmer truly felt about Christie’s alleged bullying. She has shown an affinity for Twitter, so there has to be some kind of electronic note that exists between October of 2012 and yesterday, no?

As for the Christie team’s assertion that MSNBC is gleefully assaulting their boss 24/7, in the words of Gordon Gekko, “It’s all about bucks, kid. Everything else is just conversation.”

MSNBC—by almost all accounts—had its worst year in its 17-year existence in 2013. It dropped from 2nd to 3rd in total day ratings behind CNN (after MSNBC President Phil Griffin declared the network would overtake Fox News in a non-election year). Martin Bashir (resigned under pressure), Alec Baldwin (fired) and Melissa Harris-Perry (tearful apology after racist segment on Mitt Romney’s adopted grandchild) became top news stories for all the wrong reasons. So you can imagine the champagne corks flying at 30 Rock after the Christie bridge scandal came to a head two weeks ago. A generous ratings bump across the board has since resulted for MSNBC, with Rachel Maddow–who was on this story early on–periodically beating 9:00 PM competition Megyn Kelly on Fox, once thought impossible just a few weeks back.

MSNBC won’t let this story go in the same way a dog won’t relinquish an old Frisbee. Know this: Until every last drop of every angle is explored, it will not go away on the network. The numbers are simply too good to pass up. Again, it’s all about bucks, kid.

That said, expect more New Jersey mayors and Democratic officials receiving invitations to appear on programs across MSNBC’s schedule, especially ones like Up with Steve Kornacki, where the host once covered local politics for News 12 New Jersey. Both sides benefit greatly from the arrangement. As for a contrarian opinion on the matter, any Republican official or pundit would rather be waterboarded than enter an arena that is more of a fixed fight going in than your average Coliseum scene in Gladiator.

Zimmer says coming forward now was one of the hardest things she’s ever done. You know what would have been harder? Standing up to Christie on behalf of her citizens when it mattered, when Sandy funds were doled out long ago, not when it’s politically convenient to do so now.