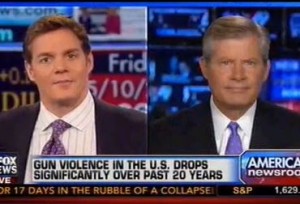 Like a great double-play combo, Fox News’ hard news and opinion programs occasionally use a bang-bang chemistry that allows them to complete the news equivalent of a twin-killing with their most ardent viewers. The latest example of this technique is a report on America’s Newsroom that fields a new Justice Department study, distorts it in a pro-gun light, then flips it to Fox News Watch at second, who pivots and fires it to the viewers at first base, as the truth dives headfirst for the bag in vain. The hustle, in this case, is for their hard news report to assert that a new Justice Department report “blows some huge holes in popular perceptions about guns and violence,” which Fox News Watch then turns into a segment about why the media won’t report on the “new” findings.

On Friday, America’s Newsroom anchor Bill Hemmer introduced a report on the Justice Department study by calling it “A new study suggesting most Americans have a distorted perception of gun violence in America.”

He quoted states from the report indicating that gun murders have dropped 39%, and non-fatal gun crimes 70%, since 1993. Tossing to reporter Doug McKelway, Hemmer asked “What does this mean, Doug?”

McKelway feinted at objectivity by saying that the report doesn’t prove that more guns equal less crime, but “there is a very strong correlation that suggests that.”

He called the study “welcome news to Second Amendment supporters,” and said that it “blows some huge holes in popular perceptions about guns and violence,” adding that “it may cause many to rethink efforts to restrict gun show sales. For example, it found among state prison inmates who possessed a gun at the time of their offense, only 2% bought their gun at a flea market or gun show.”

That stat, though, is actually nothing new. It’s drawn from a 2004 survey of state prison inmates, and is a poor measure of the need for background checks. This is self-reporting by people who have already been caught, a tiny, unreliable subset at best.

McKelway also played a clip of House Minority Leader Nancy Pelosi attributing the drop to laws like the expired assault weapons ban, and explaining that without federal laws, state and local gun laws are less effective because people can just travel to skirt the law. This seems like a pretty fair and balanced thing to do, doesn’t it? Especially since there’s nothing at all in the Justice Department report to support Pelosi’s ravings, right?

Put a pin in that. McKelway concludes that “There are between 310 million and 400 million guns in private possession across the United States. That is more than at any time in our history, and gun violence is down. Although it remains higher here than in any other western nation.” Watch below:

Got that? Gun violence is way down, so there’s obviously no need to regulate guns. This is a weighty claim to make, but if the data supports it, then this is exactly the kind of analysis that’s missing from journalism these days.

As Lt. Frank Columbo would say, there’s just one more thing. What happened to the report’s opening thesis, that Americans have a “skewed perception” of gun violence? The Justice Department study says nothing about public perception, and McKelway doesn’t present any evidence to support that part of the story. That’s a glaring omission, made more glaring by the fact that Pew just released a study that does address public perceptions about gun violence, and even buys into the same flawed premise that Fox News did. Entitled “Gun Homicide Rate Down 49% Since 1993 Peak; Public Unaware,” the Pew report shows that, as of March 2013, “56% of Americans believe gun crime is higher than 20 years ago and only 12% think it is lower.”

That’s the perfect peg for McKelway’s report, so why not use it? Could it be because that same Pew report contains a graph that immediately exposes the problem with its own conclusion, and McKelway’s? 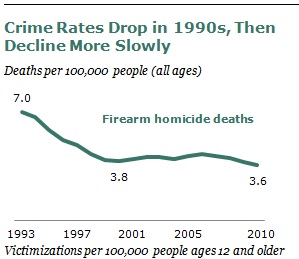 As you can see, almost all of the significant drop in gun homicides occurred between 1993 and the year 2000, and the same pattern holds for other gun stats. If Americans don’t perceive that gun violence is dropping, it’s because it isn’t, at least not for the last 13 years. Most Americans also probably don’t “perceive” a huge drop in the sale of disco records, either.

Those dates sort of ring a bell, though, don’t they? What happened in 1993 that could have caused such a sharp drop in gun violence, or at least correlated to it? That was the year the Brady Bill was passed, instituting federal background checks, and it was followed, the next year, by the passage of the federal assault weapons ban. Between 1993 and 2000, gun homicides fell by 54%, and non-fatal gun crime fell by 37%. After 2000, many of these stats leveled off, but a few actually ticked up. The year 2000 was the year that Al Gore lost the election, Supreme Court notwithstanding, because he couldn’t carry his home state, allegedly because of gun control. Democrats abandoned gun control, and gun violence stopped decreasing.

Granted, this is correlation, not causation, but it’s a much more compelling one than McKelway draws to gun ownership. In 1993, 54% of households reported owning a gun, a number which dropped to 41% in 2000, when the drop in gun violence hit its floor. Since then, as gun violence held steady or increased slightly, that number has increased to 47%. However, the rate of personal firearm ownership was 42% in 1993, decreasing to 32% in 2000, and is at 34% today. Less guns, under McKelway’s premise, equals less crime.

The question shouldn’t be whether gun violence is decreasing, anyway, but rather, are 30,000 gun deaths a year acceptable, and how many, if any, of those deaths can be prevented? Since the enactment of a law requiring seat belts in cars, the rate of traffic deaths has fallen 78%, but that doesn’t mean we stopped trying to make cars safer, or traffic laws more effective.

Fox is under no obligation to make a case for gun control, but if they’re going to present statistics, they ought to do so in a way that serves the public, not the needs of its opinion programming. An objective assessment of these statistics would include the glaring fact that the drop in gun violence all occurred over a dozen years ago, and would allow news consumers to form their own judgments. As Pew points out in the weeds of its study, there are many factors unrelated to guns which could account for the overall drop in crime, and media attention has likely given Americans the impression that gun violence is increasing more than it is, but not to the degree that Fox’s report, or Pew’s headline, suggest. If anyone else wants to report on these findings, and I think they should, they should do so honestly.