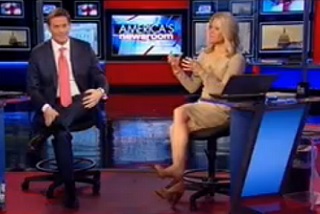 Urban sugar junkies are bracing for impact, as Mayor Mike Bloomberg‘s (R-NY) ban on large, sugary beverage takes effect on Tuesday. The controversial measure makes it illegal for a food service establishment in New York City to sell sugary beverages in containers larger than 16 ounces in volume. On Fox News’ America’s Newsroom Monday morning, co-anchor Martha MacCallum expressed shock that city inspectors would use measuring cups to enforce the ban, and decried her inability to buy a “bucket of soda.”

The problem is, MacCallum’s soda of choice will still be legal tomorrow, even in buckets.

Co-anchor Bill Hemmer informed Fox News viewers that “The city’s ban on large sugary drinks takes effect tomorrow, on Tuesday, despite ongoing legal attempts to overturn it. City inspectors will be armed with 17-ounce measuring cups to make sure restaurants and eateries are not selling drinks that exceed 16 ounces.”

Martha MacCallum cut in, stunned. “No, they’re not!” she exclaimed. “They’re going to measure them in measuring cups?”

This may seem like an odd reaction, but the measuring cups are actually a compromise from an earlier proposal that would have required inspectors to chug suspect beverages, then record the duration of the subsequent belch. That pilot program was scrapped when inspectors found that it didn’t produce a volume measurement of any kind.

Hemmer went on to explain that the owners of the nearby Evergreen delicatessen are “none too happy about this coming their way.”

“You can do that at home,” Hemmer replied, “but not at Evergreen.”

“Thanks very much for allowing me to do it at home,” MacCallum said, sarcastically. “Give me a break.”

MacCallum’s unaccountable shock at the use of measuring cups aside, the problem here is that she, and Hemmer, have now told Fox News’ audience that the New York City soda ban includes Diet Coke, when it clearly does not:

A food service establishment may not sell, offer, or provide a sugary drink in a cup or container that is able to contain more than 16 fluid
ounces.

…(1) Sugary drink means a carbonated or non-carbonated beverage that: (A) is non-alcoholic;
(B) is sweetened by the manufacturer or establishment with sugar or another caloric sweetener;
(C) has greater than 25 calories per 8 fluid ounces of beverage; and
(D) does not contain more than 50 percent of milk or milk substitute by volume as an ingredient.

Well, there’s a silver lining:  you an still get a bucket of Mountain Dew if it’s at least half milk. Yum. But according to the law, you can still get Diet Coke in whatever size you want, even without milk.

Comedy Central hosts Jon Stewart and Stephen Colbert also made similar errors about the ban several months ago, but they are fake news anchors, on fake news shows. America’s Newsroom is part of Fox News’ “hard news” programming block. While bashing the soda ban is especially popular with conservatives, Fox’s viewers should expect the information broadcast about it to be accurate.

This may not seem like such a big deal, and maybe it isn’t. The soda ban isn’t just unpopular with conservatives, and it was just a throwaway bit. I report, you decide, but here’s why I think this is important.

As I’ve said before, I don’t watch a lot of Fox News, mainly because there’s already a whole website devoted to it. When I do write about Fox News, I try to confine it to their “hard news” programs, because that is where the network has made a clear promise of fairness and accuracy. The last few of these that I’ve done have been pegged to clips that I saw elsewhere, not on Fox News, because I don’t watch Fox News.

This morning, though, I decided that a gander at Fox News might be a quick, easy way to jump-start a slow news Monday. I figured that if I watched for an hour, maybe there would be something I could write about. In fact, it took 46 seconds for Fox’s hard news anchors to say something that was utterly false. Presumably, Fox News agrees that “opinion programs” should be held to the same factual standard as “hard news” shows, but based on what I’ve seen, Fox’s hard news shows are setting that bar too low. 46 seconds too low.