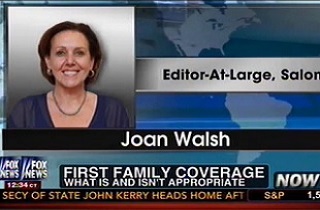 On Fox News’ America Live Wednesday afternoon, host Megyn Kelly led a panel discussion on Breitbart News reporter Matthew Boyle‘s despicable decision to report on the exact whereabouts of Sasha and Malia Obama during their current vacation, a decision that flouted long-held journalistic conventions, and endangered the safety of the 11 and 14 year-old First Daughters. Sorry, that was in Spock-with-a-beardland. In this universe, the 8 minute-plus segment was devoted to a twelve year-old story that a critic of Boyle’s wrote, about the adult children of then-President George W. Bush, a story which endangered no one.

As I have noted in this space repeatedly, America Live is part of Fox News’ hard news programming, which does not mean they can’t feature opinion panels within that format, but which ought to mean that the show’s anchor, at least, should adhere to solid news principles. Given a set of facts which includes a reporter placing the President’s minor children in immediate danger, a columnist who criticizes that act, and a twelve year-old story in which that columnist criticizes adult First Daughters in a way that does not endanger their lives, where does the anchor literally begin the story?

“It started when Joan Walsh, the left-leaning editor at large, attacked a conservative blogger for revealing where Sasha and Malia were vacationing,” Kelly says in her intro. It didn’t start when Matthew Boyle placed an internet-wide target on the First Daughters, because that’s not the story! Joan Walsh was critical of Matthew Boyle for doing something tangentially related to, but orders of magnitude more serious, than something she once did herself!

The following eight minutes were mostly devoted to lambasting Walsh for doing that tangentially similar, yet not at all the same, thing that Boyle did, with occasional, muted condemnation of Boyle. Those muted criticisms, however, were all followed by explicitly stronger condemnations of Joan Walsh, who again, endangered no one, and did her non-endangering 12 years ago. Fox News contributor Kirsten Powers, for example, said that she doesn’t “think you should report where they’re vacationing, I think they are off-limits,” but immediately pivoted to the real villain. “For Joan Walsh to call it racist, I think it’s just bad taste and bad journalism, I wouldn’t call it racist.”

Megyn Kelly defended the spirit of Boyle’s piece, but briefly noted that he didn’t have to include the Obama girls’ specific location, before pivoting back to the real crime here: Joan Walsh, and her out-of-leftfield contention that this specific strain of criticism is unmistakably racist, except not to Kirsten Powers, Monica Crowley, and Megyn Kelly. All three, including Kelly, distort that charge to include any and all criticism of the President, but set aside the merits of the argument for just a moment. How is this the story? I mean, it’s right there in the name: “NEWS.” Matthew Boyle is endangering the President’s daughters now. Joan Walsh did whatever she did twelve years ago. This is a fine point for an opinionated writer to make, but poor judgment for a hard news anchor.

To be sure, there are legitimate criticisms to be made of Joan Walshes past and present. 2001 Joan Walsh, even though she was stuck in a horrible morass of a newshole (which, in hindsight, we would all love to have continued forever), had no real excuse for going off on Jenna and Barbara II. It was cheap, and it would still be many years before The National Enquirer would enjoy its John Edwards-fueled moment of legitimacy. Of course, a Fox viewer might come away with the false impression that only the Enquirer reported on the twins, but still, that kind of sourcing is an early warning sign that maybe your subject matter lacks gravity.

Present-day Joan Walsh published a rebuttal to the attacks of hypocrisy against her, and while she quite correctly identified the factual mismatches and misplaced priorities, she could have leaned more heavily into the Bush twins pitch. The piece was, I’m sure Joan would agree, immature and unworthy, and saying so bluntly would have strengthened the rest of her rebuttal. Joan Walsh from yesterday is also arguably guilty of the same thing Megyn Kelly is, in making the lede of her original story something other than Matthew Boyle’s endangerment of the Obama girls, but on the other hand, Joan is a commentator, not a hard news anchor, and writes extensively about race and politics.

Since Kelly and company decided to engage the racism critique, it is worth correcting what I believe is their faulty understanding of it. The case that Joan made is that Boyle’s piece is part of an ongoing pattern of criticisms designed to paint the Obamas as “uppity,” not knowing their place. It’s not based simply on the existence of such criticism, but on two other key elements: the absence of such outrage when white presidents and families do exactly the same thing, or similar things; and the fact that there is a pre-existing racial stereotype about successful black people not knowing their own station, commonly expressed with the adjective “uppity.”

Maybe Megyn and company didn’t see it or are blind to this slur, but it has a long history, and if conservatives and others want to avoid being accused of exploiting it, then they should take care that their criticisms are legitimate. For example, just last week, Fox News anchor Bret Baier reported on the alleged existence of a presidential “food-taster,” after which Fox commentator Tucker Carlson suggested that the President thought of himself as a “king.” As it turned out, at least the last four white presidents had food tasters, and George W. Bush had a team of them. It is in that context that critiques of supposedly “extravagant” vacations, without any evidence to suggest that they actually are extravagant relative to white First Families’, can seem kinda racist.

To be fair, some “uppity” attacks are probably subconscious, an irritation without a name. But the larger point here is why Megyn Kelly and her panel thought that Joan Walsh’s non-life-endangering, 12 year-old attack on the white, adult Bush twins rated eight minutes of outrage, while Boyle’s current and serious infraction merited a few seconds of muted reproach?

In case you missed it, here’s the video, from America Live: