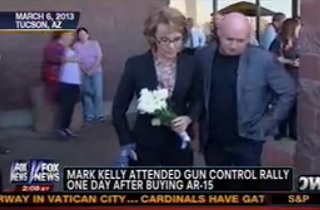 The right-wing media has been engaged in an attempt to smear retired astronaut Mark Kelly, husband of former Congresswoman Gabby Giffords (D-AZ), as a hypocrite for purchasing an AR-15 last week. Kelly explained, on Facebook and to CNN’s Wolf Blitzer, that he made the purchase to illustrate the ease with which such weapons can be procured, and to undercut claims that background checks are onerous. On Fox News’ America Live Tuesday, host Megyn Kelly (no relation) and reporter Trace Gallagher expanded on the right-wing smear by falsely citing an Arizona law about disposal of seized or found property.

On Saturday, Breitbart News reported that Kelly purchased a .45 semiautomatic pistol and a used AR-15 at a gun store in Tucson last week, then posted a message about the purchase on Facebook. The site heavily implied that Kelly only made that revelation on Facebook, and of his decision not to keep the weapon, because Breitbart News was asking around about it. Lost on the wingnuts who promoted this smear was the fact that Kelly had himself photographed filling out the background check form, a fairly ironclad piece of evidence that he always intended to post about the purchase on Facebook.

Megyn Kelly introduced the report by framing Mark Kelly as guilty until proven innocent of hypocrisy. “We’re tracking a developing story this hour in the national gun control debate,” she said. “It involves questions about why one of the most vocal supporters for stricter gun control laws has recently purchased an AR-15 rifle, which has been one of the weapons most criticized by folks who want to see fighter gun control laws. Mark Kelly, who is the husband of former Congresswoman Gabby Giffords and an astronaut, is defending his own purchase of the rifle and a handgun. Both weapons were bought just one day before he spoke at a rally for gun control.”

So far, this is only a question of fairness, not accuracy. A fair news anchor would point out that it was Mark Kelly who first announced his purchases, on his Facebook page. Reporter Trace Gallagher began his report by bending that fairness branch a little more, telling Megyn Kelly that “You have some who claimed that Mark Kelly got caught buying an assault rifle, and Mark Kelly says, no, no, he was testing the system.”

Ah, the old “some say” construct that’s so popular in falsely “balanced” news coverage, mainstream media included. It’s a way to report “controversy” rather than examine the actual facts. Some say the sky is blue, others say it’s made of cheese. You decide.

Gallagher then goes on to infer, deliberately or not (you decide) the motive of Mark Kelly’s revelation. “Earlier this month, you see it there,” Gallagher said, showing the photo that Mark Kelly posted, “he walked in a Tucson gun shop and bought, as you said, an AR-15 assault rifle and .45 caliber handgun. The next day he appeared at a gun control rally at the very same shopping plaza where his wife, Gabby Giffords was shot two years ago. Now, Breitbart.com was about to break the story of Kelly’s buying the assault weapon when Kelly posted on his Facebook page that he was turning the assault rifle in to Tucson police.”

How does Gallagher know that Breitbart was about to break the story? Mark Kelly posted his message to Facebook at around midday on March 8, but Breitbart.com didn’t get around to posting their now-irrelevant story until March 9. That’s not much of  ticking time bomb. More tellingly, Gallagher shows the photo that Mark Kelly posted on Facebook, without noting the source, or its clearly exculpatory nature.

At least he played a clip from Mark Kelly’s interview with Wolf Blitzer, in which Kelly explains that he had no idea that Breitbart News was meticulously tracking his gun purchases. Unfortunately, Gallagher chose not to air that portion of the interview.

Still, at this point, this is only a question of fairness, a subjective standard that some say is debatable. But then, Gallagher takes a giant mallet to the truth, in an attempt to cast Kelly’s activism as fruitless. “Here is the irony about him turning in his assault rifle to the Tucson police,” he says, “because in Arizona, there’s a law that mandates that voluntarily surrendered guns be treated as assets, and sold off to help balance the Arizona budget, so it’s likely the gun that Mark Kelly turned in to the Tucson police could end up in the hands of somebody else.”

Gallagher’s assertion about Arizona law is false. The legislature there is currently considering a bill that would require guns turned in to police to be sold, but under current Arizona law, no such provision exists. The current provision only covers property found or seized:

A. If after thirty days notice has been given the owner or person entitled to the property has not taken it away, the property may be sold. The proceeds shall be paid to the general fund of the jurisdiction from which the unclaimed property was received.

Pro-gun activists have asserted that the existing law does cover things like gun buybacks, but that interpretation is unsupported by precedent, and undercut by the need for the new measure. If Trace Gallagher is ignorant of the law, attorney Megyn Kelly certainly should not be.