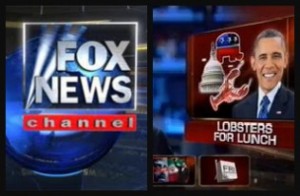 On Friday, right-wing blogs ate up the Daily Caller “scoop” that President Obama begged off some lobster salad by allegedly telling Sen. Susan Collins (R-ME) that his food taster was not around. Although The DC‘s report played coyly straight with the story, wingnut blogs pointed to this as evidence that our uppity ol’ POTUS doesn’t know his place, and thinks he’s some kind of royalty. That fact-challenged sentiment made its way onto Fox News’ airwaves over the weekend, with a big assist from Special Report anchor Bret Baier.

First, let’s get the facts straight, as best we can. There’s actually no evidence to suggest that this president employs a dedicated food taster (the Secret Service and the White House are understandably quiet about such details), but according to one report, a White House chef helped Chef Tyler Florence cook a dinner for the President once, and tasted the food. As even an amateur cook will tell you, that’s what chefs do, they taste the food they’re preparing. On another occasion, Chef Rick Bayliss noted the presence of a “navy chef who ensures quality.”

Frankly, I would be shocked if there were no one supervising the preparation of the President’s meals, especially when he’s away from the White House, but neither of these examples supports the “royal food taster” narrative, which doesn’t even make much sense. A “food taster” would only be helpful against the worst poisoner in the world; it’s far more effective to supervise the preparation and ingredients, and not just to block deliberate poisoners. You also want to make sure none of the prep cooks have open, runny sores, or like to handle raw poultry without washing their hands. It’s a completely reasonable precaution that can be handled by a non-dedicated staffer.

So now, we have Sen. Susan Collins telling The Daily Caller that President Obama refused a plate of lobster salad and Fox Family potato chips, but that he “looked longingly at it..He honestly did look longingly at it, but apparently he has to have essentially a taster, and I pointed out to him that we were all tasters for him, that if the food had been poisoned all of us would have keeled over so, but he did look longingly at it and he remarked that we have far better food than the Democrats do, and I said that was because I was hosting.”

Now, anyone who has ever had in-laws is well-practiced at “looking longingly” at some monstrous concoction, and politely insisting that they have a deathly allergy to the graham cracker crust on an otherwise delectable Sweet Taco Pie. In President Obama’s case, he’s got a much better excuse, but it’s likely that even if he truly longed for the vittles, and had a taster at the ready, his Secret Service guys would have advised against it because, like I said, only a crap poisoner would use a poison that acts quickly enough to fell a taster. The “taster” excuse was likely shorthand, and also likely not meant for repetition.

Be all of that as it may, the notion that this is news, and that this makes President Obama some sort of uppity royal biggity-big, relies on the premise that this is somehow out of the ordinary, an impression reinforced by Fox News anchor Bret Baier on Friday night. Baier reported on the “irony” of Thursday’s luncheon “to discuss the massive financial woes,” which he said “featured an extravagant lobster lunch.”

The accompanying graphic said “Lobsters For Lunch.” The way Collins made it sound, however, it was some lobster salad, and a few other local Maine favorites. Not a stack of Lunchables, but also not what you’d call extravagant, and not “lobsters.”

Baier reported what Collins said about the taster, then concluded by saying, “The President has long been rumored to have someone who tastes all of his food to make sure it’s not dangerous, but the Secret Service will not confirm that, as is the case with most security procedures.”

From there, Fox News’ opinion programming picked up the theme, sprinkled in some “King Obama,” and voila! Uppity Pie! On Friday night’s Hannity, Fox News contributor and Daily Caller publisher Tucker Carlson wrapped up the show with the food taster story, calling it a “bizarre twist,” and concluded, “A food taster? It is good to be king.”

Carlson also noted that the Secret Service doesn’t reveal such details “over the year,” but said that Sen. Collins appears to have “confirmed that remarkable fact, and you’re paying for it.”

On Fox and Friends Saturday morning, Carlson trotted out the “good to be king” and “you’re paying for it” lines again, but was also challenged by co-host Alisyn Camerota, who asked “But doesn’t every president always have a taste-tester?”

Surely not, or Carlson’s King Obama narrative would just be a racially-loaded accusation that he doesn’t know his place. If the President insists on a taster when others didn’t, maybe he really doesn’t know his place, but if that’s standard practice, then there’s some other reason that this president doesn’t deserve it.

Doesn’t every president always have a taste-tester? Surely not, because even if Tucker Carlson is just trying to pimp some blog post from his own partisan website, Fox News anchor Bret Baier just got done reporting that “The President has long been rumored to have someone who tastes all of his food,” and made no mention of past presidents having taken this precaution.

Except, of course, there has been reliable reporting that at least the last four white presidents used food tasters, including Ronald Reagan, and The New York Times even reported that George W. Bush had a team of them. Perhaps Tucker Carlson can be forgiven his partisan zeal, but there’s little excuse for Bret Baier’s failure to spend 30 seconds on The Google.

Carlson went on to revisit the “King Obama” theme several more times over the weekend, as is to be expected, but if Bret Baier values his hard news bona fides, he’ll take the first opportunity he can to correct his reporting. Carlson is entitled to his opinion, but Bret Baier has a duty to the facts.

Here’s Bret Baier’s report, followed by Carlson’s four other mentions of the story, from Fox News: