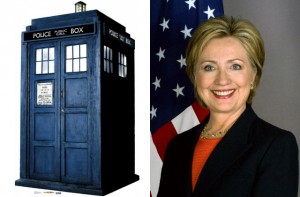 In an interview with Iowa TV station WHO, Democratic presidential Hillary Clinton told her interviewer an analogy for her controversial email use that an everyday Iowa voter told her the day before.

“The best explanation I heard of this I heard yesterday in Des Moines from a man I was shaking hands with…” she said. “He said, ‘This is like you drive through the same intersection for four years and the speed limit is 35 and then you move out of town and they change the speed limit to 25. And then they start sending tickets to people who drove while the speed limit was 35 over 25.’”

But Fox News points out that the person who first made that analogy was Hillary Clinton herself, three weeks ago. Here’s what she told The Des Moines Register:

You know it’d be like somebody in the Department of Transportation setting speed limits that had cameras where cars were going down a road, and pictures of license plates were being taken and let’s say the speed limit was 35. And then retroactively the police say that speed limit should’ve been 25, so let’s go back and look at anybody who drove down that road and exceeded 25, we need to follow up on that.

Which leaves us with two possibilities:

I think we can rule out number two. Hillary Clinton has never acted deceptively before now and her trustworthiness numbers are through the roof.

So as Sherlock Holmes famously said, once you eliminate the impossible, whatever remains, however improbable, must be the truth. So yes, Hillary Clinton is time traveler who engaged in a Bill and Ted’s-esque adventure sometime in the past month.

Of course, Clinton also said a man told her the analogy, but let’s not even go there.

Watch above, via WHO.