FoxNews.com Wants To Know Your Thoughts On ‘Fashionable Burqas’ 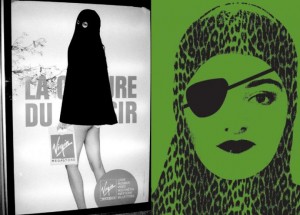 Fox News’ website posed a doozy of a question to its readers today: “Are Burqa-Inspired Fashions Glorifying Female Oppression or Encouraging Women to Dress More Conservatively?” Are those the only two choices we get?

The article lists several instances of the conservative Muslim garb finding its way among the pages of fashion magazines like French Vogue – noting, of course, that France recently banned burqas (which covers the wearer’s body from head to foot) and niqabs (which is a veil that covers the wearer’s face), making headlines from European runways, and even parading across the set of Bill Maher‘s show, then asks, “But is turning these conservative Islamic garments into a fashion statement a novel idea or simply tasteless?”

Some, apparently, are concerned that presenting religious garments as “exotic” novelty items strips these of their intended purpose, or diminishes what some view as the oppression inherent in being forced to don such clothing. Then again, still others express joy that conservative Muslim women can also be seen as fashionable or elegant (while avoiding being simultaneously sexualized by the fashion industry).

But the FoxNews.com article, I think, while still informative, misses the larger point here.

If I can borrow a (stylish, vaguely mitre-inspired) hat from my colleagues at Styleite for just a moment, the issue at hand doesn’t inherently relate so much to Islam or burqas or nijabs – they just happen to the hot, widely contested topics of the moment. The real issue is what, if anything, those in the fashion industry are trying to say about burqas, or whether they simply want to draw attention to a brand or individual using one of history’s most polarizing and attention-grabbing techniques: Taking religious beliefs, clothing or accoutrement out of context, sometimes to show off their beauty (because, really some religious clothing can be downright dazzling), often times to mock what they may stand for.

It’s something the fashion industry has done time and time again, using (and/or abusing) religious garb to make a statement, even if that statement is merely “look at me.” (Stylelite, for example, recently featured a post about Hasidim-inspired accessories appearing on the runway at Moscow Fashion Week, and Jean Gaultier’s Spring 2007 fashion show featured models dressed like different depictions of the Madonna – not be confused, of course, with an entirely different Madonna who has often appropriated religious garments and iconography in order to make a fashion statement.)

That’s not to say Muslims shouldn’t feel offended (or confused or delighted or amused or saddened or rendered completely apathetic) by this trend, just that the fashion industry’s relationship with religion has always been one wrought with controversy. But that’s not to say that, if done correctly, using (and, yes, even abusing) religious garments or accessories can’t make an intelligent or thoughtful statement about a particular religion, or women, or politics, or society. The question then isn’t “Is this fashionable?” or even, really, “Is this offensive?” but, rather, “What is the point, and is that point valid and made well?”

FoxNews.com’s article doubts that burqas will be seen alongside evening gowns in designer stores across the world, or worn by fashion victims who wouldn’t know a hijab from a hamburger. But that’s not why burqas are being seen in French Vogue or across runways. Not at all.

Artwork by Princess Hijab, via Bitch