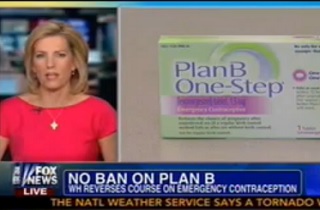 The Fox News watchdogs over at Media Matters have flagged another clip of conservative commentator Laura Ingraham saying something “outrageous,” which is a bit like flagging a clip of the sky being blue, but in the process, they missed the big, fat lie that Fox and Friends‘ Steve Doocy told about President Obama‘s policy on Plan B emergency contraception. The Justice Department has dropped its appeal of a judge’s ruling that the drug be made available over-the-counter, without age restrictions, which Ingraham called a “good deal for pedophiles” and statutory rapists.

In a bit of surely unintentional irony, Ingraham pivoted from saying “I wish we had people on Capitol Hill, more of them, who are more informed and more curious about the abuse of federal power,” to wishing that the federal government would use its power to override science and medical privacy. Asked about yesterday’s decision, by the Justice Department, to stop the Obama administration’s tooth-and-nail fight to keep age restrictions on Plan B, Ingraham said “It’s a good deal for pedophiles, good deal for people who commit statutory rape against young girls.”

Outrageous! But see if you can spot the lie in Steve Doocy’s setup:

“The Obama administration now extraordinarily has said that girls of any age, actually I would imagine men as well,could have access to the morning after pill,” Doocy said, noting that “for a while it was like 17, you had to be at least 17,” but not anymore.

As we’ve already established, it wasn’t the Obama administration that decided to lift age restrictions on Plan B, it was Reagan-appointed U.S. District Judge Edward R. Korman. What makes Doocy’s incorrect statement particularly egregious, though, is that he then goes on to mention the previous age restriction, without explaining how that restriction came to be.

In December of 2011, the Obama administration decided to overrule the Food and Drug Administration’s determination that Plan B should be available over the counter, with no age restriction. HHS Secretary Kathleen Sebelius announced that the drug would be available to women and girls 17 and older, but would still require a prescription for those under 17. At that time, President Obama sold the ruling by evoking images of little girls being marketed Plan B “alongside bubble gum and batteries.”

That decision was struck down in April by Judge Korman, who blasted the Obama administration in his ruling. Even after that ruling, the Obama administration not only continued to appeal, it re-labeled the drug “not for sale to those under 15 years of age *proof of age required* not for sale where age cannot be verified,” ignoring the judge’s order.

None of this has been politically easy for the Obama administration, which has taken a lot of heat from liberals over this policy. Initially, I was among those who agreed with Judge Korman that the age restrictions were “arbitrary, capricious, and unreasonable… politically motivated, scientifically unjustified, and contrary to agency precedent.”

Since then, I’ve come around to a more complex position on the issue.There are competing interests in this issue, interests which are extremely compelling. In my view, neither choice (requiring a prescription for underage girls, or selling Plan B like aspirin) serves all of those interests well, but Korman’s decision does accomplishh the most important one: making sure that young women and girls have access to the health care that they need.

Plan B differs significantly from acetaminophen, or other safe, over the counter medicines, in that it is used to treat a potentially dangerous condition, especially for a very young girl. These are not women, these are girls, and if a 12 year-old girl is buying Plan B, I would like someone to ask her a few things. For example, if she’s had unprotected sex, does she want to get an HIV test? Is there anything else about the encounter that she might want to report, or even just to talk about? We have consent laws for a reason, a very good reason, so while confidentiality is absolutely essential to getting girls to find the help they need, there are compelling, non-moralistic reasons to desire some sort of intervention in this transaction.

Requiring a prescription is the most readily available way to accomplish this, the “plug-and-play” option, but that means that even for adults, Plan B must be kept behind the counter, reducing the overall use of the drug. Getting a prescription can also significantly delay the purchase of the drug, which has a limited window of efficacy. Maybe there’s some sort of compromise that could be made, requiring Plan B manufacturers to staff a hotline that could offer this intervention to girls, confidentially, at the point of purchase. Barring that, though, Judge Korman’s decision is the best solution, on balance.

However you feel about age restrictions on emergency contraception, though, it is the indisputable truth that the Obama administration favors them now, and always has. Steve Doocy owes the President a correction, and an apology. Laura Ingraham, on the other hand, needs to study up on just how heavily contraception weighs into a rapist’s calculations.