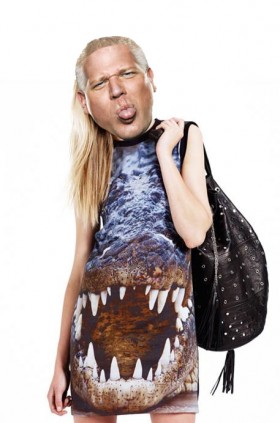 Just kidding! What, he can joke about killing a frog and I can’t joke about him having a vagina? Whatever. It’s Friday. I can do what I want. IT’S A FREE COUNTRY! IT’S IN THE 9/12 MANIFESTO!* You know what else is in the Manifesto? Number 3 from the 9/12 Manifesto: “I must always try to be a more honest person than I was yesterday.” LYING ABOUT BOILING A FROG ISN’T HONEST THERE, GLENNER!

Call it “Vagina Glenntata” — everyone’s afraid of getting sucked into his dark, swirling maelstrom and getting eaten alive. It happened to Van Jones. It happened to Yosi Sergant. Could it happen to America, fretted Time magazine? (Headline: “Is Glenn Beck Bad For America?“) And the answer is — yes! Glenn Beck is bad for America, just like the innocent, waifish young patient was bad for the gynecologist in Teeth.

But let’s take it back to Fox — the actress, not the network — whose wisdom can guide us here. A powerful, confident vagina, she says, “intimidates men – not all, but some.” So what of those “some” of which she speaks? Well, they don’t see a scary, ravenous, sharp-toothed, hungry gobbling maw — they just see, you know, someone they can chill with, n’ stuff.

So why not be that chill about Glenn Beck? Dude. He fake-boils frogs on his TV show, weeps ridiculously on cue, and leads protests from the comfort of his TV studio. He blames the media from his national television show on a top-ranked news network and makes wet-T-shirt jokes to elderly women. He wonders aloud who rules the country, the people or the government, right after showing a montage of the Founding Fathers. He speculates that the President hates white people, even though that President also happens to be half-white with white family members, advisors and friends. Sometimes I think he’s just saying words. This guy is only a threat insofar as he’s very, very confused. 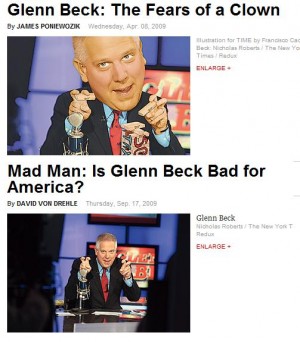 It’s interesting that the same picture forms the basis of the illustration accompanying the last two Time stories on Glenn Beck. See it here on the latest version “Is Glenn Beck Bad For America, Stated Safely in The Form Of A Question?” versus the article from April, called “The Fears of a Clown.” We don’t need an illustration to know that Beck’s a clown — that’s his modus operandi. And “clown” may be a better metaphor here than “hungry, toothsome vagina,” because despite their smiling exteriors and big poufy hairdos, squeezable noses and big floppy feet, people are irrationally afraid of clowns, even though the worst they’ll do to you is squirt you with water from a fake flower.

But water never hurt anyone! Just ask the 70-year-old lady who Glenn Beck made that wet-t-shirt joke to! Glenn Beck is entertaining, sure, but that’s what clowns are for. SNL’s got his number, they can handle the media criticism on him from here on in. The rest of us should stop getting so distracted by him, because whatever he may be channeling, he’s not really adding anything. And until he does that, then he shouldn’t be given so much power to take things away.

What was that Sigmund Freud said? Sometimes, a cigar is just a cigar. So, too, let it be with Glenn Beck. It’s time to just stop giving him so much attention — at least until he starts saying insightful things, like Megan Fox.

Related:
What’s That About A Powerful Vagina? [Mediaite]
Fox’s Glenn Beck increasingly sets media’s agenda [Media Matters]
Is Glenn Beck Bad For America? [Time]
Why, Yes, That Is A Toothy Vagina On My Shirt, And I Am Glad To See You [Mediaite]