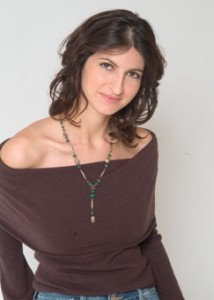 Melissa Lafsky is a friend of mine, but she’s always seemed strange to me for one reason: She loves horror movies. Loves them. Thrillers, slashers, creature features — she’s seen all of them, probably a bunch of times, and certainly without her eyes covered. I, by contrast, mute the sound when some stupid slasher commercial comes on during The Daily Show (seriously, Comedy Central, it’s ENOUGH). I fail to see how a movie called “The Texas Chainsaw Massacre” could be remotely appealing, let alone beget any sort of sequel. And yet, horror films are big box office, and always seem to find an audience. Which explains why Melissa’s new column, “Horror Chick,” has become such a favorite over at The Awl, where she writes with gusto about dismemberments, flayings, hangings, stabbings, impalings, devourings, eviscerations and the odd demonic possession. The tagline from her column is “Melissa Lafsky really likes horror movies.” In honor of Hallowe’en, I asked her why.

What is a “Horror” film per se? What makes it different from, say, a “Thriller?”

Nowadays the difference is mostly body count. But it’s also the place the film takes you – a good horror movie will go much darker into the human psyche. It’ll do things that you really can’t believe were done on screen. A thriller will keep you in suspense, but it won’t keep you up at night. The Game left you freaked out for a little while, but Wes Craven will make you turn on every light in your house and buy a doberman.

I think creature movies (both good and bad – King Cobra was in the latter category, but it was still awesome) are some of the best horror out there — because they confront us with our own physical weakness in the face of animals, as well as the horror that is man’s attitude towards nature. Just watch any creature film, from great to awful — Jaws, Lake Placid, Anaconda, Deep Blue Sea, or yes, Mega Shark v. Giant Octopus. You’ll find these films are all about how we harass, degrade and destroy animals that are more powerful than we are. It’s pretty tragic.

Jaws is in its own category – it packs every fear and neurosis humans can muster (the unknown, mortality, water, the elements) into one film. It is a movie I think about every time I enter a large body of water. What other movie has that kind of effect on your psyche, on a permanent basis? Plus it is the master of creating fear without ever showing the monster (until Bruce makes his first appearance towards the end) 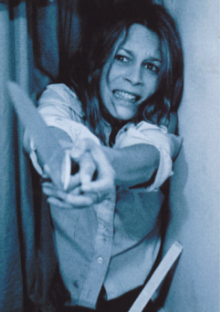 Slasher flicks have a very interesting place in society – they’re perfect barometers of cultural and social standards at the time. The moral code set out by the Friday the 13th movies, which graduates to the post-irony of the Scream films. (The Friday the 13thmoral code: having sex will get you killed. The Final Girl is the pure, virginal one. Every teen who has sex or does drugs dies a horrible gory death.) But hands down my favorite are creature movies. Even terrible ones. I’ve seen Anaconda maybe 12 times, and I root for the snake every damn time.

Talk to me about Rosemary’s Baby and The Exorcist. Do they still hold up? What are the pillars of the genre? (Poltergeist, The Shining, Hallowe’en?)

Rosemary’s Baby absolutely holds up – it creates a timeless element of vulnerability and self-doubt. When you are totally at the mercy of people (ahem, men) who are telling you you’re crazy, but in your heart you KNOW something is very very wrong – that is the definition of terror. The Exorcist, I hate to say, doesn’t really hold up. Sure, the crucifix scene is still shocking, but we’ve come so far with CGI that many of the effects just look silly. Plus I’ve seen too many interviews with Linda Blair complaining about how the green slime smelled awful and stained her dress. Sort of spoils the effect.

Can you explain to me why Paranormal Activity is scary but Slither is funny? (NB: The Slither poster looked like a tiny army of sundried tomatoes joining a girl in the bath.)

All good horror incorporates humor – the line between horror and humor is very thin. We laugh as a defense mechanism whenever we’re confronted with something terrifying that we can’t quite process. Paranormal Activity has some very funny moments – granted, they’re deliberate laughs, and a bit contrived (the boyfriend trying to trick his girl into having sex in front of the camera by insisting “Oh no, that flashing red light is just the battery turning off!”). But the contrast between those light moments and the demon effects make the scares all the more potent.

Slither is basically a big post-modern homage to all the body-gore of films like Cronenberg and Re-Animator and anything Clive Barker. It’s a totally ironic film that pokes fun at itself all the time – and manages to totally gross you out at the same time. 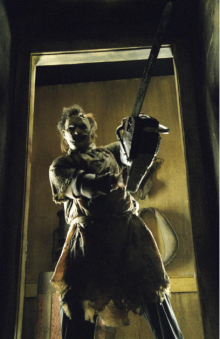 Let’s talk about where Horror meets Camp. There’s a big difference between Rosemary’s Baby and Army of Darkness. Is it still horror if it’s winking at you?

Sure, in that they both belong in the genre. Army of Darkness broke some new ground – certainly you hadn’t seen too many films in which the strapping leading man tore apart a witch with a chain saw. It’s less psychological and more experiential – but both are taking you places you aren’t used to going in polite conversation. Both challenge the viewer. And implant some terrifying images (Bruce, may your beautiful face never again be zombified and oozing black goo)

I’m actually devoting an entire column to Eli Roth. He deserves his own discussion. Well, maybe not “deserves” – but he’s getting it anyway.

Dude, you are this gigantic feminist. How can you stomach these flicks that are all about carving up nubile young girls?

I don’t really think that’s true – sure, there are the slasher flicks, but the boys really do get it as much as the girls. And movies like When a Stranger Calls or Wait Until Dark that prey on female vulnerability perform a service – they allow men to enter a world where they’re always physically vulnerable. I used to live with a man who was 6’3″ and 210 pounds. I once said to him: “You have no idea what it’s like to walk down the street as me.” He simply had no concept of being less physically powerful than just about any man he encountered – which, let’s face it, is my reality. Watching movies like this gave him a window into my world. Plus women are getting SO much more power in horror films these days- Have you SEEN Hard Candy?

For the love of God, why do they insist on making Saw VI???

Because it’s the most important film series ever made! And because every sequel means another $60 mill in domestic box office sales for Lionsgate.

How many bolts do you have on your door?

Many. And a rabid St. Bernard sired by Cujo waiting behind them. (hear that, Rush Limbaugh fans?)

Gimme your ten top horror flicks. This is a great excuse for a slideshow.