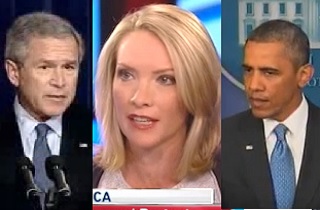 On Friday afternoon, President Obama spoke with eloquence and deeply-held emotion about the death of Trayvon Martin, the unarmed black 17 year-old who was shot and killed by recently-acquitted George Zimmerman. Former White House Press Secretary Dana Perino was not very happy with the President’s speech, and advised him to pipe down, unless he also wants to give speeches when black teens shoot babies in the face. Care to guess what tune Perino sang when a white president weighed in on the death of a white citizen?

Perino told the panel on ABC News’ This Week that ““When a president speaks, it’s to multiple audiences,” Perino said. “So from the prism of self-defense, when you think of a young mother whose two year old son was shot in the face by the two black teens who approached her in Atlanta, and that baby has died—Why do presidents choose to speak about one case and not the other? That’s why it’s better maybe not to talk about any of them. They chose to talk about this one.”

She was referring to the case of 13-month-old Antonio Santiago, who was shot and killed in March. The suspected shooter in that case is 17 year-old De’Marquise Elkins, who is currently in custody awaiting trial, and whose case has nothing to do with self-defense. The only thing they have in common, it seems, is th involvement of a black 17 year-old.

Of course, I’m not trying to suggest that Perino’s reaction has anything to do with President Obama being black, just as Perino’s suggestion that “black teens” committing a horrific crime should be a counterweight to Trayvon Martin’s killing surely had nothing to do with race. Me and Dana, we’re just saying facts that happen to be true, people. I’m also not saying that the race of the victim has any effect on Perino’s reaction, any more than Dana was suggesting that maybe Trayvon Martin had it coming because black people are scary. That is not at all what she came right out and said. George Zimerman’s brother said it using the very same comparison, and his defense attorney made that explicit case during his closing, and others in the media, left and right, have followed suit, but Dana was not saying that at all. She was just bringing up a case that she thought of, and telling facts about it.

When Dana Perino worked for white President George W. Bush (again, no suggestion there, it’s just a fact, he was white), Bush weighed in on a case involving the death of a private citizen, one which caused a deeply-felt national debate. That private citizen was a white woman, but I’m only mentioning that because it’s a true fact, and not to make any other sort of suggestion. Here’s then-President Bush talking about the death of Terri Schiavo:

President Bush, you may recall, did more than just speak about Terri Schiavo, he also supported and signed a law to circumvent her husband’s legal decision to remove Schiavo’s feeding tube. It was an extremely polarizing case, and one which surely qualifies as having two audiences of which to be mindful. Surely, Dana Perino was sickened by this intervention, and immediately resigned, or at least made Bush send some other flack out to deal with it:

“The president looked at all options before signing the legislation last weekend,” Ms. Perino said. “He felt that the legislation passed by Congress was the best course of action. Terri Schiavo’s case is extraordinary and sad.

“As the president said yesterday, he believes that in a case such as this, the legislative branch and the executive branch should err on the side of life,” Ms. Perino said.