How Do You Discuss Science When A Party’s Candidate Calls Scientists The Enemy? 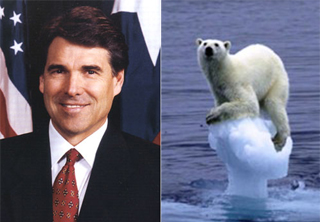 Yesterday on Fox News’ The Five, a segment was devoted to discussing whether or not Jon Huntsman’s presidential campaign was already over. The reason: he’d “admitted” to believing in evolution and climate change. This morning, Poynter posted a great essay about how objective journalists can handle stories about Huntsman and Rick Perry. The problem, the essay finds, is that those stories necessitate reporting that scientists do, in an overwhelming majority, believe in man-made climate change and that makes the journalist appear to be biased against conservatives.

Wait, what? Since when did reporting a fact of science become political?

The problem is rooted, as so many that we at Mediaite cover, in the fact that our political discourse is ruled by a “black and white,” “us vs. them,” “let me choose my ‘team'” atmosphere all the way down to its two party core. And, as each election comes up, the parties eagerly look for new issues to debate, hoping that they’ll catch on. Soon those issues are boiled down and divvied up between the parties and in the past decade, the global warming and evolution debate have somehow turned into “Democrats/Science vs. Republicans/Anti-Science.”

It’s easy to see how the topic of climate change first started along those lines. First you have decades of the Conservation Movement being a traditionally liberal issue. Then, when global warming first became the cause célèbre that it is now, it was spearheaded by a former Democratic presidential nominee who was championing regulation.

However, despite the fact that the science was overwhelmingly on the side of man-made climate change, the conversation didn’t become about how to stop it. No, the political parties latched on and soon, after years and years of cable news “debate,” all of the subtlety had been weathered away. Now liberals had to believe everything scientists said implicitly (which, as Greg Gutfeld pointed out in that Five segment, goes against the very nature of scientific experimentation) while conservatives were forced into the even harder situation of having to believe all scientists were liars (by the way, just a reminder).

Here’s the Five segment in question from Fox News:

And, while it seems that the Republicans have been the ones really trying to politicize science, the Democrats have been 100% just as guilty. Dana Perino was right in the above clip. Liberals do use religious questions as a trap to get into topics like evolution knowing that Republican candidates need to pay lip service to their faith but also knowing that their base has been trained to see the inevitable answers as proof of ignorance. And lets not even get started on Democratic candidates and faith. Do you think the DNC gives out special timers so candidates can make sure to talk about Jesus some but not too much?

These topics may have started out relevant to politics with questions of carbon dioxide regulation or abortion laws, but, as they get more and more diluted and turned more and more into the abstract concepts of anti-science or anti-religion, they have less and less to do with actually running the country. No rational person should ever view either of those topics in black and white terms, so why do we want our leaders to?

So where is this going? Will our political discourse keep spreading like the Blob, swallowing more and more topics, splitting them, and grafting each side onto one of our two parties until nothing is safe to discuss without it being “political?” Will we come to a primary season a few decades from now when something like baseball has gone through the process?

Hell, why not? I mean, it is the national past time, it’s only natural that it will be involved in selecting our leaders. Republicans will only allowed to root for American League teams and Democrats only allowed to root for the National League because, somewhere along the line, someone decided that the NL’s lack of designated hitters seemed like a needless nanny state-ism. Why not let the teams decide who gets to hit?

Soon the All-Star Game will be debated on Sunday morning news shows and a pretty (although, if this is America’s future, presumably overweight) anchorwoman on a show like The Five will be theorizing that a Democrat Senator from New York will never be president because he had the gall to say he likes the Mets instead of the Yankees.

Of course, maybe I’m just overreacting. So science and religion have become political now. Who cares? They’ve always been pretty political. Yes, I may worry about a time when every single issue is a minefield because political parties have needlessly “chosen sides,” but that day is still a far way off. And hopefully it will never come.

In fact, I’m sure it will never come.

Editor’s note: A few paragraphs up, the writer of this post mentioned America’s growing obesity problem. As we all know, Michelle Obama has tried to fight childhood obesity. Mr. Bershad’s comment was, in no way, meant to be an endorsement of she or her husband. We apologize to anyone who may have viewed that comment as biased against Republicans. We promise to never mention obesity again.