How Oscar’s Sausage Is Made, Or, How The Men of the Academy Vote With Their Steak Knives

How Oscar’s Sausage Is Made, Or, How The Men of the Academy Vote With Their Steak Knives 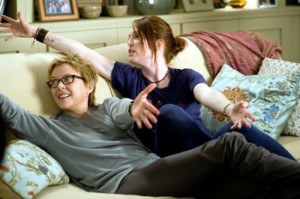 We know Oscar has, for most of its 83 years, been a boy’s club – Oscar hosts, Best Directors – we know, we know, we know. But often the focus is on the end result (with questions like, where were the X and Y by women?) as opposed to looking at the process. The gatekeepers to moviemaking are almost overwhelmingly male – the studio heads deciding what gets greenlit, what NYT film critic Manohla Dargis called “all guys making deals with other guys.” In recent years, though, indie film has made serious inroads with boundary-pushing outside-the-mainstream work, and more and more films and filmmakers from outside the sytem are breaking through. But – once those movies are made, guess what? The gatekeepers to what films get showered with awards and plaudits remain the same: Dudes.

In The Wrap yesterday, Steve Pond noted this phenomenon:

“The Kids Are All Right” faces a big obstacle in its quest for Academy Awards, says Anne Thompson: men in the Academy. “Oscar campaigners call them the Steak Eaters,” she writes about the rank-and-file AMPAS members who are credited with the victories of films like “Silence of the Lambs,” “Braveheart,” “Gladiator” and “Crash” over “Brokeback Mountain.” This year, she and her sources thinks the guys will help out “True Grit,” “The Town” and “The Fighter,” but will be uncomfortable with “Kids” because it’s a small-scale women’s film about a gay relationship, directed by a woman (Lisa Cholodenko) from the world of indie films.

How your Oscar sausage is made: with sausage!

Thomson, rather depressingly, lists a number of obstacles to the film getting Oscar recognition, among them “It’s written and directed by a woman.” Yes. That is an obstacle. Homophobia is also an obstacle: “I fear that the Steak Eaters in the Academy who were uncomfortable with the gay male love story in Brokeback Mountain may also shy away from the gay subject matter in The Kids Are All Right.” Part of her rationale is also that Mark Ruffalo‘s character is “not a central character”: “More than one male has complained that they do not like the movie’s attitude toward Ruffalo. They think the movie is not kind to him.” I don’t want to spoil anything but doesn’t he get welcomed into an awesome household, get fed and get a little nookie with Julianne Moore on the side? Sounds like he was treated pretty good to me.

For those who think that the Academy proved itself not sexist by voting for Kathryn Bigelow and The Hurt Locker last year, not so fast. Bigelow was one of the guys, a proven member of the big-budget studio club, who made a resolutely male war movie. No women were in it.

It’s a very different story for Kids, which Thompson describes as “a women’s picture” (in her list of the obstacles it faces, natch). That made me think of another women’s picture, Black Swan, which has gotten all sorts of awards buzz this season. (And look! It even passes the Bechdel Test!). That’s good, right? Yes, but – it reminded me of a tweet I saw earlier today, from the WSJ’s Julie Steinberg, taking me down a whole other rabbit hole: “When Portman says only way people will see Black Swan is b/c of lesbians, she props up @breteastonellis, who insists film is a male medium.” Wait. I thought the film was about the insanity-inducing rigors of ballet! (Apparently Portman noted that while only some moviegoers might want to check out the balletic crazy-spiral, “everyone” would want to check out the hot lady-on-lady-below-the-tutu action.) And wait, Bret Easton Ellis said that? Ugh, so he did. Apparently film requires “a male gaze” and that’s why women can’t direct. There is an American Psycho joke to be made here, except I didn’t see it. Sorry, male gaze!

The good news: Thompson thinks The Kids Are All Right will get a Best Picture nom (it’s up for a Golden Globe for Best Comedy or Musical) – but not Best Director nod for Cholodhenko (see above). She does, however, see Cholodhenko getting recognized in the Best Original Screenplay category, along with co-writer (and, disclosure, my pal)  Stuart Blumberg. The Steak Eaters giveth, and the Steak Eaters taketh away.

And now can we pause for a second to review what we’ve just learned and bonk our heads against the wall? Because in 2010 – that there could actually be a category of people voting along these lines – with that nickname! – is insane. Crazy ballerina insane. Oh, sorry, lesbian ballerina insane.