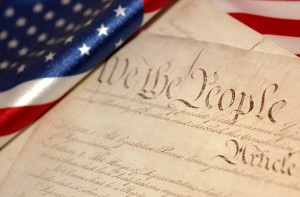 After Republican politicians like Donald Trump and Scott Walker endorsed the idea of ending birthright citizenship, politicians and pundits on the right have debated whether that would require a constitutional amendment (as Carly Fiorina argues) or whether it would require passing a simple law (as Ann Coulter argues). The proponents of a constitutional amendment argue that the 14th Amendment clearly requires granting citizenship to all children born in the U.S., while opponents say that it has been misinterpreted.

But according to The Huffington Post, it turns out that trying to amend the Constitution to end birthright citizenship is itself unconstitutional, and we’re just kind of stuck with it forever.

“It turns out that the very idea of amending the Constitution to end birthright citizenship for the children of immigrants — a move that squarely targets Latinos — would probably be found unconstitutional…” writes legal writer Christian Farias. “The reason these proposals would be found unconstitutional is rooted in the very thing Republicans are attacking: the 14th Amendment of the U.S. Constitution. Because for all the provisions and principles that the 14th Amendment stands for… one of the amendment’s cornerstones is its promise of equal treatment for everyone.”

I’ll be blunt: this argument is asinine. The whole point of amending the Constitution is to change what is and isn’t constitutional. Saying that the very process itself could ever be unconstitutional is a non sequitur. It’s akin to saying one can’t pass laws that contradict other laws.

What Farias is advocating for– knowingly or unknowingly– is tyranny, plain and simple. It is the notion that the American people for all days are bound by certain laws that they are completely incapable of changing, period. That’s all nice and fine when it comes to the parts of the Constitution everyone likes, but taken to its logical conclusion, it would have wreaked havoc on the social progress of the United States.

For what it’s worth, I actually think it’s a horrible idea to amend the Constitution to end birthright citizenship. But I would never presume to tell my opponents that they must be slaves to my preferred policy for all eternity. It saddens me that a document originally set forth to give people the chance to dictate their own laws is now being invoked to rob the American people of their God-given right to self-determination.