If Trump Wins, London’s New Muslim Mayor Will Likely Be Banned in the US 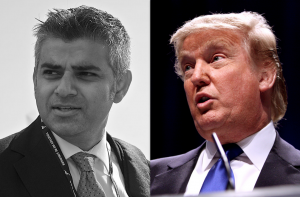 The people of London have made history: They elected a Muslim as their mayor on Thursday. (That shrieking sound you’re hearing is from Trump supporters.) That’s right, Sadiq Khan, the London born Member of Parliament of Pakistani heritage, is now the mayor-elect of London.

But Khan’s victory was no easy feat. Khan, a member of the center left Labour Party, had to overcome what he dubbed as a Donald Trump-esque type campaign of “division and fear” where his conservative political opponents tried to link him to Muslim extremists in a six degrees of Kevin Bacon type way.

That same game is played here in the United States by right wing media outlets. (I know because it’s been done to me.) Typically, it’s where they try to smear Muslim Americans by claiming that the Muslim in question was guilty of some dastardly deed because they once ate a falafel with a guy who knows a dude who might have shared a cab with someone on the “No fly list.”

In any event Khan won. Now here comes the potentially tougher part. If Donald Trump is elected president, Khan may be banned from entering the United States. That’s right, the mayor of the third biggest city in Europe may never be allowed to step foot in the United States simply because of his religious faith.

As a reminder to those who forgot (or thankfully blocked it from your memory), Trump declared in December in a Darth Vaderesque way: “Donald J. Trump is calling for a total and complete shutdown of Muslims entering the United States until our country’s representatives can figure out what is going on.”

And in case you thought Trump might be mellowing after becoming the presumptive GOP nominee earlier this week, think again. He told NBC’s Lester Holt on Wednesday that he still supports banning over a billion people from America simply because of their religion. (Hmmm, where else in history have we heard about a politician running on a platform of demonizing a certain religion?)

Seems like Khan is out of luck. No buggy rides for Khan around Central Park or visits to Disneyworld with his family. And more importantly that means Khan can’t come to the United States to team up with U.S. mayor’s to work jointly to counter the threat of ISIS or even team up for tourism initiatives that could create jobs in America.

Now Trump did tell MSNBC’s Chris Matthews there would be exceptions to this Muslim ban but I don’t think it applies to Khan. As Trump told Matthews last month, Trump’s wealthy Muslim friends could come into the United States: “They’ll come in, and you’ll have exceptions.” But barring Khan being a MBFF (Muslim Best Friend Forever) of Trump or at least being one of Trump’s Muslim partners that he hypocritically makes big money with while demonizing Muslims, as I wrote about in the past, no America for Khan.

But then again maybe Khan is better off not coming to the United States if Trump is president. After all, exit polls during the GOP primary found that approximately 70 percent of Trump supporters favor a Muslim ban. And a poll from last year found that only 49 percent of Republicans in Iowa even believe that Islam should be legal in America. Even more shocking is that 40 percent of Republicans in North Carolina think that any person who practices Islam should be arrested.

I wish Mayor elect Khan well with his new job. And here’s hoping that he never has to deal with Trump’s un-American religious ban.

Dean Obeidallah is a former lawyer turned comedian and writer. He is the host of SiriusXM radio’s “The Dean Obeidallah Show” and co-directed the comedy documentary, “The Muslims Are Coming!“