Death and The Internet | Celebrity | Technology

Is The Internet Going To Help Us Live Forever? 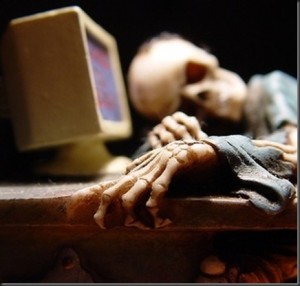 That’s the tragedy of dying, after all. It’s not that our life as we experience it ends – it’s that, in time, the impact we have on the world ends. When we die, that impact begins to dissipate. For example – if your grandparents are no longer alive, do you know where they’re memorialized? How about their parents? Do you know your great-grandparents’ names? Those eight people – people entirely responsible for your existence – have likely vanished into history. You may, too.

There are two antidotes.

The first – the really hard one – is celebrity. But even celebrity fades.

An article in Sunday’s Times described the travails of the Jimmy Stewart Museum in Indiana, Pennsylvania. (If you aren’t familiar with Stewart, skip ahead to the next paragraph – my point is made.) Jimmy was born in Indiana, a town not replete with celebrities. And Stewart was one of the greats. For decades he was near the top of Hollywood’s A-list, the star of classics like Mr. Smith Goes to Washington and It’s A Wonderful Life, the leading man in a slew of Hitchcock classics like Vertigo and Rear Window. For these movies, he’ll be remembered for decades, centuries. But not necessarily forever. Even now, his aging fan base is no longer robust enough to keep the doors of a modest museum in his own hometown open – fourteen years after his death.

What’s more, it happens even during a lifetime. Yesterday, Boing Boing shared the story of a man who somewhat intentionally met an elderly, drunk Dean Martin at Martin’s favorite hamburger joint. Martin was surprised to meet any fans, slurring that “most of [his] fans these days are old broads.” Celebrities outlive some of their fans. Young broads and young dudes become old broads and old dudes. They die, and with them die their passions. Celebrity fades.

Pop quiz. How many real people who lived before the Christian era can you name? Plato, Aristotle, Alexander the Great? Maybe a dozen more? How many of today’s celebrities do you think will still be known in the year 4,000?

It’s a trick question. Many, many more – because we live in time period that immediately follows the Dark Ages. We have the Internet.

Humankind will, eventually, be divided into two periods. The era of lost history and the era of the Internet. The hiccup of scientific repression and tumult that we now call the Dark Ages will just be another blip in this massive hole of lost information, the true Dark Ages. From now on, every human that lives will leave a fingerprint, however tiny or however massive, on a human history that will become infinitely huge, choked with text and text messages, photos and videos and public records.

We have issues to resolve in the interim. “The Internet Is Filling Up with Dead People and There’s Nothing We Can Do About It” lamented a recent article by the ever-savvy Christopher Mims. In this period, as we learn how to turn on the lights, Mims notes that we’re also learning how to deal with the legacies of our contemporaries who’ve died mid-transition, during this information dawn. The companies that facilitate our online identities are struggling with it as well: Facebook has a form to report profiles of the deceased; Twitter, astonishingly, relies on the postal service. The considerations are not trivial, but they’re immensely important. What happens to your online self when you die? How do you expect others to interact with your virtual corpse? How long will these companies last after you do, and what will their successors do with your identity? (Another reason to own your own identity online.)

The Internet allows us to build rent-free, permanent museums containing as many remembrances as we wish, that will last until the the planet or universe is destroyed – and likely for some time after that. Jimmy Stewart’s museum will end up in the same place as yours: stored bits of information on a webserver, or on whatever supplants webservers. His will just have more movies in it.

In two millennia, your great-great-great-however many times-grandchildren will be able to tour your family history.

What they’ll see is what we, in this moment, struggle to show them.