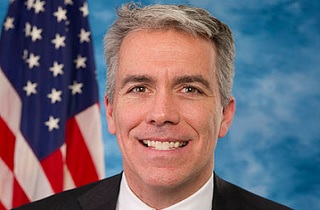 On this, the 50th anniversary of Dr. Martin Luther King, Jr.‘s historic I Have A Dream speech, Americans are commemorating the event in a variety of ways, but if you’re a white conservative, chances are you’re honoring Dr. King’s legacy by rewriting his speech. While that exercise alone should earn an automatic 7 or 8 on the patented RAF™ scale, former Rep. Joe Walsh (R-IL) multiplies that times pi, plus his own hypotenuse, squared and cubed.

On his radio show Wednesday, former Congressman Joe Walsh commemorated the anniversary of Martin Luther King’s most famous speech by rewriting it as a laundry list of things that are wrong with black people. Prefacing his remarks with the disclaimer that “I’m not even sure this is kosher,” Walsh launched into the thing with gusto, deviating significantly from his prepared speech:

Now, unlike most liberals, I actually like Joe Walsh. In a world of over-scripted politicians and calculating trolls, Joe Walsh is completely unvarnished, and completely without guile. It took Newt Gingrich 50 or 60 years to slip up and admit it was black people that Republicans have been talking about all these years, but Walsh just lays it out there, and I respect that. I respect that because I also think it means Joe Walsh can be reached.

Since I know Joe Walsh is an avid Mediaite reader, and I know how some white people react to the r-word (racist), I’m going to ask him to stop yelling “Tommy! Tommy! Tommy!” at his computer for a few minutes, and just listen.

I don’t think Joe Walsh is “a racist” any more than President Obama thinks his grandmother was “a racist,” but you don’t have to be a racist to say something that’s racist. It helps if, like Joe Walsh, you’re old enough to remember when the black community was referred to, in polite company, as “the Negro,” but really, all it takes is a twisted vision of “the truth,” the thing that all racists think they’re telling, and from which all racist statements spring.

What Joe Walsh did to the I Have a Dream was not just a desecration, although that is certainly one of his transgressions. To pervert what has become a sacred American text about defeating the evils of racism into a laundry list of complaints about black people is, itself, a premise that inherently disrespects the legacy of the original, even if the substance of that perversion were legitimate.

It is not. I know Joe thinks he’s not being racist, and maybe he thinks he’being accused of something unforgivable, but he should just listen to what he said. When you say that “blacks” should do something, you are also saying they’re not doing it now, and that white people are. This is not by implication, it is explicit. When Joe says he has a dream that “young black males and females graduate from high school,” he’s saying they don’t do that now, and that white kids do. News flash: black kids do graduate from high school, and even college, and lots of white kids don’t.

When Joe tells “Jesse” and “Al” that he dreams that “blacks cease their dependency on government, which has enslaved them to a life of poverty,” he is saying that black people are dependent on government, and white people are not. Hell, even Newt Gingrich knows that’s not true.

When Joe says black people should learn that “it’s up to me not to hang around with people who shoot other people that look just like me,” I’m not even sure how that’s supposed to work. If the police can’t even tell which ones are the troublemakers, how are black people supposed to? Should they Stop and Frisk themselves? Are they supposed to move away from all other black people? Should they also avoid standing in their own driveways?

The good news is that personal responsibility and social responsibility are not mutually exclusive. Black parents have the same hopes and dreams for their kids as white parents, and many of the same conversations, with a little something extra. One conversation that’s gotten a lot of attention is the one about being extra-courteous and slow-moving around police, but that theme extends to every facet of life. In order to succeed, black kids are more likely to face obstacles that others won’t face, and there are things they can do, and are doing, to prepare for that. That’s the truth, just as it is true that there are fewer obstacles than there used to be. Joe Walsh’s job is to remove those obstacles, not make himself one.

[photo via U.S. House of Representatives]