Jon Karl Asks George W. Bush If He’s Familiar With Criticism From Press: ‘Not From You, Jonathan’ 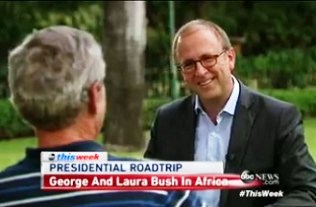 From the Thanks But You’re Not Helping Department comes a throwaway moment in former President George W. Bush‘s interview with ABC News’ Jonathan Karl. In an exchange about criticism of President Obama‘s Africa policy, the former president quipped that it “Doesn’t surprise me that presidents get criticized.”

“You… you saw that every once and a while?” Karl asked, somewhat sarcastically.

“Yeah,” President Bush replied, adding “Not from you, of course, Jonathan.”

It was a short, yet telling, reminder that despite all of the Obama-era screeching about an “in-the-tank” press, the Bush Era was essentially a long stretch of pillowy coverage, punctuated by a brief piling-on at the end, when it made no difference.

President Bush probably thought he was being nice to Karl, who, it should be noted, scored what ABC News described as the “only broadcast television interview” given by the former President and First Lady. In fact, though, it was probably unfair for President Bush to single Jon Karl out like that. It is an open secret among White House reporters that the Bush-era White House press corps gave President Bush a years-long holiday following 9/11, and the mainstream media followed suit. There was a sense that being too critical of the administration would seem unpatriotic, a sense that lasted long enough to allow the United States to get deep into the Iraq War, and one which is revived every time a Bush-era official wants to opine about the current administration.

Meanwhile, the myth of the “in the tank” pro-Obama media has evaporated in the wake of relentless, unfair, irresponsible, and downright false reporting on the various spokes of the Scandalabra™ family of presidential “scandals.” The same media that leapt to accuse President Obama of being the second coming of Richard Nixon when the IRS “scandal” broke could barely muster a whisper when it fell apart. The same press that yawned when President Bush’s NSA spied on Americans without warrants suddenly got really interested when President Obama’s NSA kept a list of phone numbers with warrants.

When President Obama’s second term is long over, there may come a time when he sits down for an interview with someone he feels grateful toward for not piling on, but that person will be someone like Ed Schultz, not a reporter for a down-the-middle news organization.