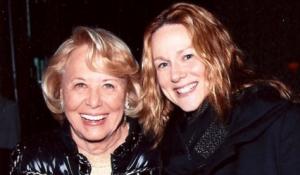 “ART, you know, deals with that side of people’s lives where they are not aware of what they are taking in … of the judgments they are making.”

This from the London Sunday Times.

Have you been watching one of my all-time favorites, Laura Linney, doing her stuff on cable as a woman who thinks she is dying of cancer in The Big C? This is comedic drama at its best and happens on Showtime on Sunday nights at 10:30 PM EST.

Well, now Laura is back on Broadway as well in the thought-provoking drama Time Stands Still. I just loved this play about a foreign correspondent photographer, wounded in action, and what happens to her when she comes home from the Middle East and tries to begin leading a normal life. You have until January 23 to catch the great, the talented Laura Linney in person onstage. (Although there could be an extension.) And I am so proud of Lynne Meadow and Barry Grove for daring to put on an interesting play, give it a brief vacation, then bring it back again.

If only all of Broadway could be this flexible.

THE DYNAMIC Daryl Roth was so blown over by the Actor’s Fund/Friends Indeed benefit set up for one night only of Larry Kramer’s great play about the beginning of the AIDS epidemic, The Normal Heart, she will try to bring it back for a Broadway run. And, of course, she will try to place the fabled actor, Joe Mantello, in the leading role. Larry Kramer wrote his own self into history in this gadfly part.

Hey, kids, the Navajo Nation, the largest Indian reservation in America, is choosing its first female president. There are dirty tricks aplenty in this all-American contest. But Lynda Lovejoy has already won twice as many votes as any of her opponents and looks likely to win on November 2.

She is a 46-year-old mother of three and is a New Mexico state senator. Ms. Lovejoy is fighting allegations that she drinks, which is a big no-no in Navajo circles. The Navajo nation spreads across 26,000 square miles of Arizona, New Mexico and Utah and is home to 173,000 Navajo. The nation’s laws are overseen by the U.S. government for review.

Opposition to Ms. Lovejoy is largely that she is Catholic, married to a non-Navajo and wears business suits. But the Navajo are a matriarchal society and people introduce themselves using their mother’s clan name.

Why is the Wall Street: Money Never Sleeps star, Carey Mulligan leaving us? The actress, 25, is going back to Britain having cooled her relationship with Shia LaBeouf.

“I’m moving back to England; it’s a long story,” says Carey. “I am spending some more time here at the moment, just spending time with my family –- really,” said the actress to the Telegraph columnist Mandrake.

After being nominated for an Oscar for her role in An Education, the actress said she loved New York “maybe more than Los Angeles or London. I could live in New York. I think I’m happiest there.”