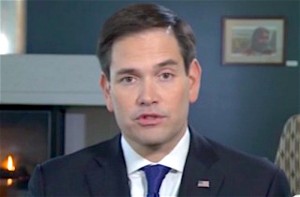 During Saturday’s ABC Republican debate, Marco Rubio laid out what appeared to be a pretty straightforward explanation of his position on drafting women:

First, let me say there are already women today serving in roles that are like combat. That, in fact, whose lives are in very serious danger, and so I have no problem whatsoever with people of either gender serving in combat so long as the minimum requirements necessary to do the job are not compromised. But, I support that, and obviously now that that is the case I do believe that Selective Service should be opened up for both men and women in case a draft is ever instituted.

But what was clear has now become murky after it was announced Thursday that Rubio plans to cosponsor a bill put forward by Republican Utah Senator Mike Lee to strengthen the ban on women being drafted.

Though Rubio made clear in last Saturday’s Republican debate that he supports opening up the draft to women, Alex Burgos, the Senator’s spokesman, affirmed his support for leaving that decision up to the legislative branch. “Senator Rubio agrees with Senator Lee that Congress needs to determine the future of the Selective Service system and is working on legislation to codify that role and plans to support it,” Burgos said.

Women are of course already exempted from registering for the draft by federal law. But the Supreme Court’s 1981 decision which upheld that policy was based on the fact that women were not allowed in combat roles. When the Pentagon allowed women into combat roles in 2015, the legal justification for excluding women from the draft became shaky. Lee’s bill would reiterate that women are banned from combat, and that only Congress can set the qualifications for who can be drafted.

So why is Rubio, who seemed to support women being drafted, co-sponsoring a bill that bans women from being drafted? To “leave that decision up to the legislative branch?” But if the courts or President Obama did end up overturning the male-only draft, it would knock down a policy Rubio doesn’t support and enact one he does. So he’s essentially taking steps to ensure his preferred policy never becomes law.

There might be something admirable about the notion that Rubio is intentionally disadvantaging his preferred policy positions in order to protect Congress’ traditional powers from encroachment by the other branches. But the protection this bill provides is pointless and nonexistent. President Obama is already powerless to contradict the preexisting, unambiguous law. And if the courts really want to strike down the male-only draft, the fact that Congress passed a law saying they can’t would simply be ignored.

In this case, it’s largely irrelevant who has the power to set up the draft (it’s unquestionably Congress). What matters is whether they are doing so in a constitutional manner. I assume that if Congress legislated that only blacks could be drafted, we could all agree that striking it down on 14th Amendment grounds is perfectly valid and doesn’t threaten the separation of powers in the least. The same principles apply to an all-male draft.

To put it another way, imagine we are talking about a much more politically-charged issue like abortion. I suspect that if Hillary Clinton sponsored a law banning abortion and clarifying that Congress alone has the power to legislate on abortion, a lot of people would have a very, very hard time believing that she supported the right to abortion and was just making a principled stance on the separation of powers.

Make no mistake, this is a political move. Rubio’s support for the bill comes after rival Ted Cruz attacked him for the position and after a number of conservatives criticized the view (Jeb Bush and Chris Christie also endorsed women being drafted). But rather than just admitting he’s changed his mind, Rubio now has to defend a garbled and confusing position instead.