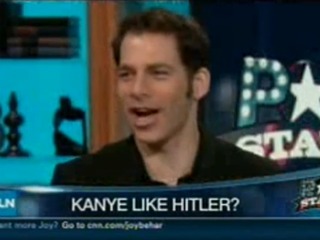 Joe Levy, editor in chief of Maxim, that veritable Bible of celebrity underboob, was a panelist on Joy Behar‘s HLN show last night. Talk, naturally, turned to Michele Bachmann‘s Newsweek cover, as well as to Kanye West, who compared himself to Adolf Hitler (“People look at me like I’m [fudging] insane, like I’m Hitler.”) because God forbid anyone go a day without discussing Kanye West.

Behar turned to her guests and asked “‘Why is it always Hitler? Why not that Bachelor? Why not Osama Bin Laden? Why not Saddam Hussein?” Why not, for that matter, the Pillsbury doughboy, that twittering demon-blob who is clearly the very manifestation of pure, unadulterated evil?

Newsbusters’ Erin Brown sees this as Levy comparing Bachmann to Hitler, and I’m inclined to agree with that assessment. He’s lumping Bachmann in with the likes of Hitler, Hussein and bin Laden because he doesn’t like her and thinks she is bad.

Say what you will about Bachmann, her fundamentalism and her stance on homosexuality, but, as far as I can tell, she didn’t send thousands of gay people, Jewish people, gypsies and others to their deaths. No one has lost his mother because of Bachmann’s thoughts about the debt ceiling. So let’s try and put our arguments and our issues with politicians into some sort of perspective before the national discussion devolves into “lol @ her eyes” and a series of fart noises while things like, gee I don’t know, Dominionism slip by unaddressed. Because, now, this is what happens: anything remotely intelligent Levy may have to say about Bachmann and her policies have essentially been rendered white noise, as he is now the guy who compared a woman he doesn’t like to Hitler and bin Laden. It’s just a joke! Lol, sure, but it’s one that is so lazy and overused that it has become entirely stripped of any shock value or humor it could possibly have, even when obviously used as a hyperbole. That’s the point Behar was making, and it’s a point Levy brought on home. Plus, the reality is that comparing someone to Hitler says a whole lot about the speaker, without providing a whole lot of information about the person being discussed.

Are you worried Dominionism is unconstitutional? Say that. Do you vehemently disagree with Bachmann’s stance on gay rights? Articulate that. Do you worry that she’s not intelligent, or serious, or thoughtful? Do you believe she’s dangerous? Then you had better make damn sure you aren’t undermining your own argument by reducing her to a harmless caricature or by drawing more attention to your joke than to the intent behind it. It’s not about liberals versus conservatives, or men versus women; it’s about not shooting yourself in the foot when you’re trying to offer criticism.

Take a look at the segment for yourselves, from HLN: