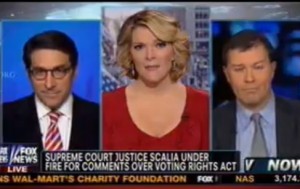 Fox News anchor Megyn Kelly continued her outraged defense of minority voting rights on Fox News’ America Live, but only in that alternate universe where Mr. Spock has a beard and does Jedi Mindmelds. In this universe, Kelly was still bothered by people like Rachel Maddow calling Justice Antonin Scalia a “troll,” and explained to her America Live panel that it angered her because “these Supreme Court justices cannot come out and defend themselves. They don’t speak publicly.”

In case you missed it, Justice Scalia angered many last week when, during oral arguments in the current Shelby v Holder case regarding Section 5 of the Voting Rights Act, he referred to the Act’s protections as “racial entitlement.” From the transcript:

And this last enactment, not a single vote in the Senate against it. And the House is pretty much the same. Now, I don’t think that’s attributable to the
fact that it is so much clearer now that we need this. I think it is attributable, very likely attributable, to a phenomenon that is called perpetuation of racial
entitlement. It’s been written about. Whenever a society adopts racial entitlements, it is very difficult to get out of them through the normal political processes.

I don’t think there is anything to be gained by any Senator to vote against continuation of this act. And I am fairly confident it will be reenacted in perpetuity unless — unless a court can say it does not comport with the Constitution. You have to show, when you are treating different States differently, that there’s a good reason for it.

That’s the — that’s the concern that those of us who — who have some questions about this statute. It’s — it’s a concern that this is not the kind of a question you can leave to Congress. There are certain districts in the House that are black districts by law just about now. And even the Virginia Senators, they have no interest in voting against this. The State government is not their government, and they are going to lose — they are going to lose votes if they do not reenact the Voting Rights Act.

Even the name of it is wonderful: The Voting Rights Act. Who is going to vote against that in the future?

Scalia’s meaning is comically clear, especially when you read it in context: Congress is too afraid of the blacks and their race-traitor brethren to do the right thing, and let Shelby County suppress black votes through redistricting. Even the Virginia senators!

But if you didn’t catch Scalia’s meaning, Megyn Kelly has you covered. Before tossing to her panel, and before claiming (on her hard news program) that Supreme Court Justices “cannot come out and defend themselves,” Kelly played the audio of Scalia’s remarks so the audience could decide for themselves. Just kidding, she offered this “hard news” interpretation of the above passage:

Justice Scalia seemed to suggest that the federal government no longer needs to keep an eye on Southern voting in this way, that folks can just bring individual lawsuits if there are cases of discrimination, like they do up North. And the way he phrased it, saying what Congress is doing is voting for a quote, racial entitlement, got some people very fired up.

Scalia and others may have made “suggestions” to that effect elsewhere in those oral arguments, but the passage that got Maddow to call Scalia a “troll” isn’t about any of those things, it’s about Scalia taking on a new role for the Court: Official Congressional Sac. He’s not saying that it’s wrong to apply the law only to some states. He’s not even saying it’s wrong to apply it to these states. He’s saying that Congress is too afraid of the racial equality “lobby” to do the right thing. In my book, that “logic” alone is enough to earn Scalia the “troll” designation (if too many people vote for a law, the Court has to step in?), but he’s also saying that protection from racial discrimination is a “racial entitlement,” one of the many little extras America gives you for being black.

Luckily, Megyn Kelly is there to protect Antonin Scalia’s rights, or he’d have to wait for Fox News to book him again.

To the extent that Scalia’s remarks are open to interpretation, Kelly could easily have just played them, instead of offering a biased summary, and her assertion that Scalia is a poor sitting duck is just wrong. On the matter of name-calling, I tend to agree that a respect for offices and institutions is generally a good thing, but Rachel Maddow wasn’t just “calling names” when she said Scalia was being a troll, she was describing a specific behavior, and supported her conclusion with facts. It’s not the same thing, just as saying that Justice Scalia’s remarks were racist isn’t “calling names.”

The most disturbing part of this story, from a media standpoint, is what I see as Megyn Kelly’s complete lack of perspective. Of the many outrages in this story, Antonin Scalia’s wounded bill should be of concern to no one. Well, almost no one. That’s called knowing your audience.