Michael Moore’s New Movie Packs A Punch To The Gut (So, Alas, Did The AfterParty) 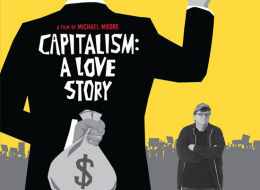 Say what you like about Michael Moore — and Lord knows people do — but you’d have to have a heart made of ice-cold stone not to be moved, enraged and galvanized by his latest film, Capitalism: A Love Story.

The movie’s title is ironic meant as it is to show how the pursuit of filthy lucre has elevated the greed above all else in this country, and installed the richest 1% of the population comfortably at the top of life’s pyramid atop a sad, screwed, disenfranchised 99% of have-nots.

Moore is a damned good showman, and he knows how to shock (with the right amount of schlock). The message sits uncomfortably at first, with idyllic 50s-era footage used to show the consumptive, materialistic underbelly of the American dream (it doesn’t seem quite right to blame it on the Beav, as it were). And Moore is a skilled filmmaker, good with the gimmick, like his montage trying to show how Ronald Reagan ushered in a new and corrupt era (one of the most shocking moments in the film is the part where Reagan hauls off and smacks a woman across the face, calm as you please — yes it’s a movie, and yes I know it’s meant to manipulate, but — wow).

But there’s Moore driving an armored truck to Goldman Sachs and politely requesting America’s money back, and then’s there’s the Hacker family getting evicted form their home in Peoria, Illinois, lugging out their furniture to a bonfire in the back so they can at least get a $1,000 check for clearing out thoroughly. There’s Moore wrapping Wall Street in crime scene tape, and then there’s scenes shot from a sit-in inside a Chicago factory where the workers said, no, you can’t give us three days notice and cut off our pay and benefits. There’s Moore trying to make a citizen’s arrest at AIG and then there’s the woman whose dead husband was insured by Wal-Mart for $1.5 million dollars — as a business investment! — and she and her family got none of it. Say what you like about Michael Moore’s methods, but when he turns the camera on these poor, bewildered, totally screwed-over people, it’s just them and their stories making you gasp in shock.

I gasped in shock all the way through the movie. At one point I had tears in my eyes. At many points I was angry. Some of the stories of corruption Moore told were unbelievable (like the private for-profit juvenile facility that bribed judges to send kids there for extended stays, paid for by the state, or the “dead peasants” corporate insurance policies referred to above. Unbelievable). 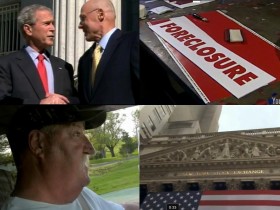 But I have to say I gasped in shock at the afterparty, too. Look, I’ve been in New York for ten years, I’ve been to extravagant events. But after a movie like that, decrying the hedonistic, excessive luxury that is available to only the very wealthy and, by the film’s logic, the wholly uncaring — well, it felt pretty weird to walk into that afterparty. Held at the fabulous, sprawling, lushly-appointed Esquire Apartment in Soho, it was packed with good-looking, well-dressed people, had multiple bars across two suites and two balconies, featured a Steak Bar, and even had a hot tub, complete with young lovelies lounging steamily therein. Meanwhile, the Hackers were there — the Hackers from Peoria, Illinois, whom an hour ago I had watched get evicted from their home, bewildered and tearful, burning their worldly possessions. I wondered what they must think. (Actually, I asked Mr. Hacker, who said that everyone in New York seemed to be beautiful, that it was their first trip and that they were having fun. I said I was glad to see that they were doing okay; he said, “Well, we’re not in that movie for nothing.”)

So — if the Hackers can be gracious about the after-party, where I enjoyed a few appetizers and a Diet Coke — why can’t I? Well, it’s not quite that; I asked, and apparently this was not a party for Moore or funded by him or the movie, but a New York Film Festival event planned anyway. Still, after seeing that movie it felt…off-message.

And worse, it will be taken as a sign of limousine-liberal hypocrisy, used to undercut the very real, very critical message of the movie, along with its all too real examples. Exhibit A: This post from Business Insider, using my tweet from the party as proof What I wrote: “Mind a little blown. Post “Capitalism” party at a sick, sick Esquire loft in Soho. SO over-the-top capitalistic. Michael Moore just got here.” What they wrote: “So, yes, basically Moore (and his supporters and his backers) plays up the stereotype of a limousine liberal. It doesn’t discredit the film directly, but it does make him easy to ridicule and marginalize.”

What didn’t get linked by Business Insider: My 12 previous tweets about the movie, and its message. They didn’t make it into the report by The Wrap, either (“Moore Celebrates ‘Capitalism’ Premiere … at Capitalism-Fueled Penthouse “) though my amazement at the party sure did. Anti-Capitalistic movie. Ultra-capitalistic party. How can that not be the headline?

Will it quell the effect of Moore’s movie, or lessen it’s impact, or make the stories in it any less shockingly true? Of course not. But Moore made a message movie here, so its up to him to stay on it.

All that said: This is an important movie to see, one that is going to stir up a LOT of discussion (I was shocked at how much my Tweets from the post-movie Q&A were getting picked up and batted about). And it should. Amongst the media, part of that discussion will be about his methods, and his facts, and whether he’s been “fair and balanced” in their presentation. But part of that discussion will be, again, about how any of this could be allowed to happen, and why it falls to Michael Moore to pull it all together.

Hopefully some of those people will at least see the movie first.