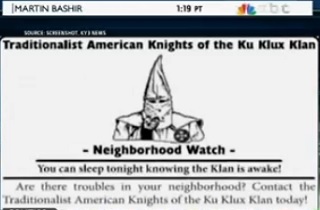 Folks in Springfield, MO got an unwelcome surprise over the weekend when the Ku Klux Klan dropped “Neighborhood Watch” flyers attached to rocks on residents’ lawns. The leaflets featured an illustration of a hooded klansman (not sure where Geraldo is on that), and urged residents to call their toll-free “Klanline,” which is presumably also listed in the White Pages. From The Grio:

The flyers were discovered by residents on Sunday morning, who woke up to find the piece of paper in a plastic bag and weighted down by a small rockreports KY3 News.

The flyer, which shows an image of a masked and hooded Klansman, was made in attempt to recruit members of the community to launching a neighborhood watch program.

“Are there troubles in your neighborhood? Contact the Traditionalist American Knights of the Ku Klux Klan today!” it says. “You can sleep tonight knowing the Klan is awake!”

One resident, Steven Burchett said he was “furious” when he came across the flyer in his front yard.

MSNBC contributor Dr. James Peterson wasn’t all that impressed, telling Martin Bashir that “I’m less concerned about the KKK, and more concerned about Republican legislatures and other political officials trying to block or impede access to the polls.”

“I’m also concerned about conservative commentators and others who want to talk about cultural depravity as one of the sort of ruling reasons for the decline of a city like Detroit,” he added.

Peterson’s comment is as much a comment on the (fortunately) pathetic state of the Klan as anything else. While still a potent symbol of a terrifying past that continues to reach into our present, organizationally, the Klan is a shell of its former self, fragmented and devoted to a doomed grasp at respectability. They’re about as scary as a rogue book club. As Peterson notes, however, Republicans have, with mixed success, conducted an all-out assault on voting rights that shows no sign of letting up, and commentators have been conducting a dangerous propaganda campaign against urban black communities.

Fellow MSNBC contributor Goldie Taylor also weighed in on CNN anchor Don Lemon‘s comments this weekend, remarking that “We ought to be talking about how we raise our children, but should not mistake correlation for causation. Certainly, where my pants are laying or how many children there are in my family, those things are outcomes. We ought to be dealing with are the things that drove these problems, and on top of that, deal with effective solutions for answering those pathologies.”