My Blood Runs Cold: Where Was the Outrage Over Scott Brown In Cosmo?

My Blood Runs Cold: Where Was the Outrage Over Scott Brown In Cosmo?

By now you’ve heard: Scott Brown, the Lt. Colonel of the Army National Guard, has just been elected to the United States Senate. Oh, also, he posed nude in Cosmo in 1982. And now that this campaign is over, I have to wonder – where was the outrage?

I have yet to find any. But had a woman candidate done the same, it would have cost her the election. No female politician could hope to make it out of a scandal like that.

Michelle Obama faces daily scrutiny from the media on every one of her wardrobe choices. It’s a national controversy every time she bares her arms – imagine if she’d posed even more bare! (I can practically hear Rush Limbaugh‘s tirade already).

Sarah Palin’s background in beauty pageants was constantly mocked during the 2008 campaign, and remains another shot to be aimed at her, another reason why she is taken less seriously as a candidate. “Before Gov. Sarah Palin came flying in from the wilds of Alaska for the Republican convention in St. Paul, there was a lot of sniggering in media rooms and satellite trucks about her beauty queen looks and rustic hobbies, and the suggestion that she was better suited to be a calendar model for a local auto body shop than a holder of the second-highest office in the land,” wrote David Carr in the New York Times in 2008.

She was derided as a dumb beauty queen, but he’s praised as a “hunk.”

Monday night on Fox, the Washington Post’s Sally Quinn said that Brown is a “hunk“ and the fact that he posed “semi-nude” actually “gave him a huge advantage in terms of the public recognition” and that “It made him a recognizable public figure, which he was not before. A lot of women think he’s really cute.” 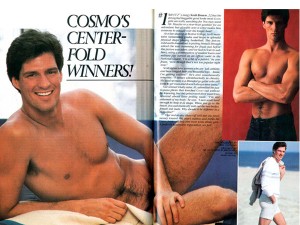 Gawker has been using Brown’s centerfold image since September. Wonkette dug up the photo in 2007 and it has been circulating in the media ever since. And yet, this man has just been elected to the United States Senate – the fact that he took his clothes off for a magazine didn’t hurt his race one bit, and the media is at fault for brushing it off because he’s a man.

It’s a sharp contrast from how the public – and the media – would have reacted had a woman candidate been in the same situation. One can only imagine how harshly a woman would be judged in the outpouring of blog posts and media coverage after a woman politician’s nude photos were discovered: She’s promiscuous! She’s a slut! She must be hiding other skeletons in her closet! And probably most importantly: the media and blogosphere would no doubt question her very qualifications and fitness for public office.

“Would Hillary Clinton or Sarah Palin even be on their town councils if they had posed nude for a men’s magazine? Of course not- the media frenzy would have sunk them, but the press is collectively giggling over Scott Brown’s centerfold,” said Patricia Murphy, Capitol Hill Bureau Chief of Politics Daily. 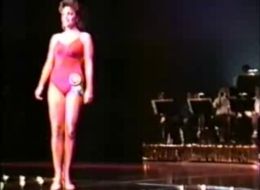 “But maybe Scott Brown’s success will open the door for Stormy Daniels to be taken more seriously? If it doesn’t disqualify him, it shouldn’t disqualify anyone,” she added.

Remember when Hillary Clinton showed the tiniest bit of cleavage and the media let loose? Even the Washington Post wrote a lengthy essay debating the meaning of the cleavage and what it said about Hillary’s image – and all she did was wear a low-cut top. And Clinton’s pantsuits were the butt of countless jokes on the 2008 campaign trail — the Washington Post said she was “dressed like a solar flare.”

“Google “Hillary Clinton’s pantsuits” and the thousands of pages that come up are an amalgamation of gentle mockery, a modicum of flattery and all-out derision,” the LA Times declared in September 2008.

It’s appalling that the media hasn’t shown more outrage over the now Senator-elect Scott Brown’s actions, where we most certainly know they would do so had it been a woman. But perhaps I shouldn’t be surprised – this kind of sexism has long been rampant in our media system. Sarah Palin’s background in beauty pageants is routinely mocked. And yet, these women faced severe criticism for these choices despite the fact that none did anything as drastic as posing nude in a national women’s magazine.

Where a woman’s very morals and character would be questioned in this situation, Scott Brown is getting a free pass from the media, and the voters that just elected him. He’s a “hunk,” his behavior was charmingly “footloose and carefree.” And meanwhile WaPo’s Quinn lavishes Brown with praise, claiming that posing in Cosmo gave him a huge advantage — you know, because Brown is a “hunk.”

Thanks for standing up for women candidates, Washington Post and the rest of the media. Thanks for nothing.