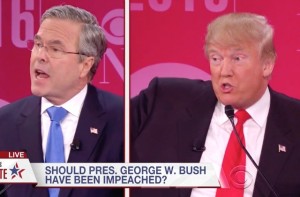 Donald Trump is crude. Trump is petulant. And Trump may have a Twitter addiction problem.

But here we are heading into South Carolina’s primary on Saturday with Trump up three touchdowns with three minutes to play. According to a PPP poll released yesterday, Trump’s crude, petulant debate performance on Saturday night on CBS has not hurt him one iota in the Palmetto State, with the billionaire now expanding his lead and receiving 35 percent of the vote, or about double of Ted Cruz and Marco Rubio, who sit at 18 percent each. New Hampshire’s silver medalist in John Kasich is fourth with 10 percent. The brand-name-challenged Jeb Bush — who needs at least a third place finish if he has any hope of a comeback — is tied for a distant fifth at just 7 percent (Context: his brother won in 2000 here with 54 percent of the vote).

Even for this insane election season on both sides of the aisle, it still is remarkable Trump wasn’t hurt by basically morphing into MoveOn.org on a Republican stage in calling George W. Bush a liar who intentionally mislead the American public into war in Iraq. As noted in this space yesterday, Bush 43 may have left office with a 34 percent approval rating, but that number has since vastly improved (as it invariably does for all ex-presidents in private life) and even sits at 84 percent among Republicans in South Carolina. Conventional thinking would therefore say attacking a beloved W. would result in a drop for Trump. But he isn’t Teflon Don for nothing, and this unorthodox attack — just like the supposed-campaign-ending remark critical of John McCain for getting captured in Vietnam and therefore not being a hero — apparently won’t do a thing to his standing among primary voters.

But here’s the real question: Is Trump — simply by dumb luck — making what looks to be disastrous comments only to ultimately have it benefit him in the long run? If you believe all of this stuff is calculated, and I actually do, Trump’s thought process now appears to be more pointed at the general election. Because think about it: Wouldn’t it truly be Seinfeld’s Opposite Day if a Republican candidate is able to attack the Democratic nominee (if a shaky Hillary somehow survives 3rd-degree Bern) on her support of the Iraq war? It’s no different than Trump effectively stripping Hillary of the sexist card she attempted to play against him by evoking her husband’s own sexist behavior and her hypocritical tolerance of it. Some thought that strategy was a mistake, too… until it wasn’t.

Remember, Trump loves polls. He mentions them in every interview as they pertain to him. But here’s another one he’s surely seen: Just 22 percent of Americans feel the Iraq War was worthwhile. So it’s not just Democrats who feel said war forever destabilized the Middle East and still hold a grudge about it to this day via what we see from ISIS, but many Independents and Republicans as well. That train has sailed, as the old saying goes, and Trump — by doing what no Republican would ever dare do — took away one big piece of ammunition his detractors would normally throw at a standard Republican. And it separates him from the political pack in the process, which is where he’s most effective during a time Washington and the media alike are loathed.

One more thought on Trump’s allegedly bad night during Saturday’s debate: The crowd was obviously stacked against him by party leaders despite the denials otherwise. He got booed at every turn. The audio from such a scenario usually is bad news for the candidate on the other end of it. But know this: When Trump gets booed, it only makes him stronger among those who see the establishment as the enemy, and that number is proving to be much larger — Republicans and Democrats alike if Bernie’s surge is any indication — than any of the high-priced pundits realize. Opposite Day more than applies: Up is down, day is night, booing equals cheering. As Bill Clinton once said, “They’d rather have somebody that’s strong and wrong than somebody who’s weak and right.”

Trump attacks the Bushes, calls them entitled, calls them liars. He sides with MoveOn.Org and Michael Moore on Iraq. It’s unconventional. It should be yet another of a series of nails in the coffin.

But the polls say otherwise. The freight train just keeps on picking up speed. Trump is petulant, crude and uses Twitter in a way that can only be described as the equivalent of drunk dialing.

The country is angry. The Republican base feels betrayed. An imperfect candidate for imperfect times.