Notes From Haiti: Behind The Scenes Of A Disaster

Notes From Haiti: Behind The Scenes Of A Disaster

Each generation has its history-changing, world-altering moment. Over the past decade, my generation has been faced with some pretty heavy moments. September 11th. Hurricane Katrina. The Tsunami. And now, Haiti. If our actions define who we are as individuals, then our collective responses to these moments are what define generations. Now is the moment for us to respond and help those who have fallen rise from tragedy.

Tragedy brings us together, and mass tragedy can unite us in ways that are so primal, we question why we don’t always feel this way, why we don’t always help. Sure, we text and donate for a bit, sending supplies and money, but soon enough, we’re going to get distracted or forget that a nation in our hemisphere lost close to .5% of its population. For a sense of scale, .5% of America’s population is 1.5 million – or the population of Philadelphia or half of Los Angeles.

Our generation has the ability to affect change. We can recognize the moment, because we’ve seen more than our fair share, grab it by the horns and make society better, stronger. We can do this because people like Dr. Scott Sundick and organizations like CRUDEM are leading the charge.

On January 14, 48 hours after the decimating earthquake in Haiti, I was sitting in my nook of an office inside my apartment in Brooklyn, reading through my friends’ Facebook Status Updates when I saw this:

I’ve peripherally known Scott for a few years – he went to college with one my friends from high school – and like many of my friends’ friends, we get along and are buddies on Facebook.

Scott is a general surgeon at Saint Barnabus Medical Center in Livingston, NJ, a long way from a nation where 14% of children die before the age of two; where the per-capita annual income is $330; where unemployment hovers 70%; where potable water is rare. As of 2006, Haiti ranks 149th of 182 countries in the United Nations Human Development Index.

Scott Sundick: The poverty here is worse [than] national geographic, and the people are sicker [than] the tv dramas. Its like MASH. – Jan. 16, 5:11 p.m.

In an email correspondence, Scott tells me how he went from the suburban sprawl of New Jersey to the poorest country in the Western Hemisphere (I did not edit Scott’s emails for content, but added brackets for context and slightly edited for grammar. He was typing on a Blackberry, so predictive text was working in all its splendor):

“A senior attending from my hospital plans a trip to operate here [in Haiti]. Our trip this year just happened to be this week, and we arrived on Saturday [January 16]. We flew into Cap Haitian and are staying at the Crudem compound, which services, and basically runs the Hospital Sacre Coeur. “ 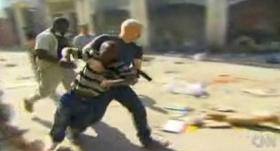 Scott and his fellow volunteers, Dr. Stephen Fletcher, who is the attending, and Dr. Melissa Alvarez, another 5th year resident, are with an organization called CRUDEM. According to their web site, CRUDEM, an acronym for Center for the Rural Development of Milot, was founded in 1968 by the Brothers of the Sacred Heart of the Montreal Province.

Hôpital Sacré Coeur is the largest private hospital in the North of Haiti. Located in the town of Milot, this Haitian healthcare facility, with 73 beds “has provided uninterrupted service for 23 years. “

Hopital Sacre Coeur is located in the town of Milot, about 70 miles north of Port au Prince. Although the distance seems short, it is a 7 hour trip by car – even before the earthquake made so many roads impassible. The hospital remains operational and is just now starting to receive patients who are being transported there by US Coast Guard helicopters.

70 miles. Less than the distance from New York City to Philadelphia. This distance posed a slight problem immediately after the quake.

“When we first arrived, they were not bringing patients here, and [for] over 2 days we basically communicated that we were sitting I’m [sic: in] an empty hospital with a trauma team while people needing surgery to save their limbs or their lives were dying in the street.”

>>>NEXT: “Haiti is becoming a nation of amputees.”