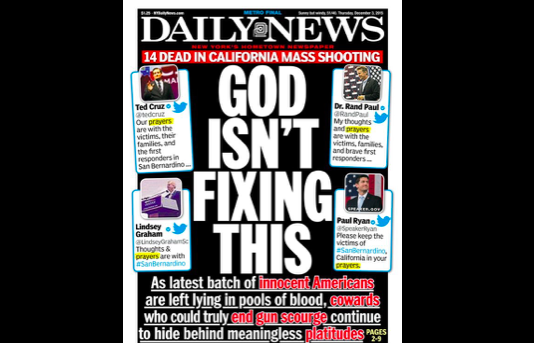 The mass shootings last week at a Colorado Springs Planned Parenthood clinic and yesterday afternoon in San Bernardino, California are horrible, unspeakable acts that are now all-too common in today’s America. And the reaction in the media and on Twitter to these events has been profoundly sickening. Disturbing. Almost psychotic…

We keep hearing about how hopelessly polarized this country has become. We see the vitriol amped up by each side of the political spectrum… particularly members of the media who find any and all ways to politicize and exploit every mass shooting in an attempt to blame what they perceive as the other side. There was once a time tragedies like this would bring the country together. Now it’s become a game of one-upsmanship for political debate. This was painfully evident all afternoon and evening on social media, where one could witness second-by-second liberals and conservatives both not so-subtlety hoping, rooting for the identities of the shooters in San Bernardino to either be white supremacists or Islamic terrorists, all in the pathetic effort to advance the preferred narrative.

But the tipping point in this war of words comes with a Thursday New York Daily News cover that is nothing short of revolting, basically blaming Ted Cruz (R), Rand Paul (R), Lindsay Graham (R) and Paul Ryan (R) for not preventing the deaths of 14 people and 17 wounded because of their support of the 2nd Amendment. The other crime? Sending out condolences to the victims and families of Wednesday’s mass murder.

Of course, this is the same publication that featured this cover in 2014: 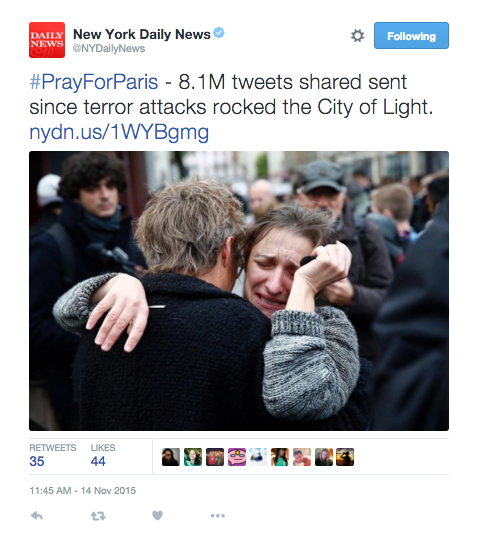 And then there was this judgment-free headline in 2012:

‘You’re in our thoughts and prayers:’ Obama responds to Newtown teachers’ note on classroom whiteboard http://t.co/qPGHK0yN

Prayers by some after tragedies are fine. Others? Not so much. Obviously depends on the letter in parenthesis after the name. So here’s a question: If the two suspects responsible for San Bernardino are products of radical Islamic terror (San Bernardino police confirm the names of the suspects as Syed Rizwon Farook, 28, and Tashfeen Malik, 27, with the Federal Joint Terrorism Task Force now involved and a motive not yet officially determined), please explain again how those four Republican politicians on the cover are being linked to these 14 deaths again?

That question likely won’t be answered and no apology will ever come, of course, because the Daily News is already patting itself on the back for having its most re-tweeted cover of 2015 in record time. Know this: Going viral is really the goal here, you see. Selling more papers the overwhelming objective. In case you haven’t heard, the paper is already in very big trouble, losing $20 million per year and sinking fast. Owner Mort Zuckerman put it up for sale earlier this year, but there were no takers. Staffers are being let go left and right. Like other papers before it, it cannot and will not survive too much longer at this rate.

So if the Daily News puts up a cover as shameful as it is hypocritical and it goes out of business tomorrow, who cares about the ramifications of one little headline, right?

Because if you think this problem simply is solely about guns–and nobody is saying there’s isn’t work to do on that front regarding gun show loopholes, for example, because there absolutely is–you’re not paying attention. More FBI agents are needed. Hundreds, thousands more (the suspects’ home is being called an IED factory). Vigilance via reporting to authorities by, for example, the neighbors of the suspects who were suspicious but said nothing perhaps also could have prevented this. Mental illness also is a huge factor if the perpetrators of other mass killings we’ve seen this year alone is any indication. This is a multi-layered, extremely complex issue. Pointing the finger in such simplistic fashion and screaming “Do something!” at the Speaker of the House and some presidential candidates isn’t going to accomplish anything except divide us further…

Some of you will cheer the Daily News for its choice. Others will call it for it is: Exploitative. Reckless. Offensive. This is the same paper who put the moment of death for two young journalists in Virginia shot and killed on live tv on its cover back in August and was properly slammed for it.

Does the publication go down this route because they care?

This is how it works what passes for journalism in 2015. Usually the addition by division adage applies here, yet the number of readers keeps subtracting.

Nothing — not even a heavily-retweeted headline can save the New York Daily News now.