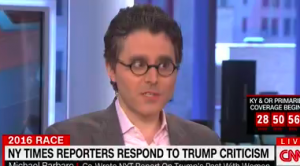 The New York Times is in major damage-control mode today after the woman featured in a Sunday cover piece contends that her words were taken out of context. The piece, Crossing the Line: How Donald Trump Behaved With Women in Private, opened with an anecdote from Rowanne Brewer Lane, one of the billionaire’s former ‘companions.’

The article, which Trump has assailed, alleges that Trump asked her to change into a bathing suit in a “debasing face to face” encounter. Lane says that, in fact, the encounter wasn’t ‘debasing’ at all — and that she always thought Trump was very ‘gentlemanly.’  She lashed out at the Times for not providing the full context of her words. The reaction is now spiraling a bit out of control so much so that the NY Times is being forced to defend the article. This morning, they sent reporters, Michael Barbaro and Megan Twohey on CNN to assure everybody that Ms. Lane’s words were not taken out of context. The journalistic duo contend that the article was approached with an eye towards honest and fair reporting.
“We quoted her warmly and at length,” Barbaro said when confronted by CNN’s Kate Bolduan about whether he took her quotes out of context.  “There is no single dimension to Donald Trump and women, and I think our story makes that clear and I think it makes it clear through the voices of the people we interviewed.”

But can we take Barbaro, who serves as the Times political reporter at his word? Is he really trying to accurately portray Trump?  As my colleague, Joe Concha, wrote back in August, Barbaro is clearly not a Trump fan. Back then, Concha wrote, at length, about how Barbaro needed to decide between being an opinion writer and a ‘un-biased’ political reporter

Why? A sampling of some of his recent tweets show that he is far from dispassionate when it comes to Trump (and also sarcastic):

Entire Trump campaign, arguably, is journalistic lesson about over-coverage of elites, their views, the weight they carry.

Just in time for debate! Trump controlled companies sought visas for 1,100 foreign workers. Protecting US jobs is he? http://t.co/nACYuszKPA

Barbaro’s article exposes how Trump may have ‘crossed the line’ with women in private company. Perhaps, it is also Mr. Barbaro who has crossed the line — from objective journalist to advocate.