Obama and the Mosque: It’s Not That Hard, People 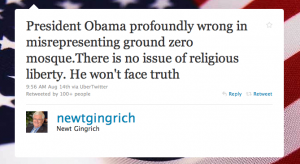 Oy, this so-called “Ground Zero Mosque” issue is vexing. So much debate, rhetoric, angst, grandstanding, outrage, outrage over the outrage, op-ed writing, pundit pontificating, facebook-note-penning and fingers jabbed emphatically in the air — and for what? The issue is flat-out moot, for just the simple reasons that President Obama articulated:

“Let me be clear: as a citizen, and as president, I believe that Muslims have the [same] right to practice their religion as anyone else in this country. That includes the right to build a place of worship and a community center on private property in lower Manhattan, in accordance with local laws and ordinances.”

That statement is correct except for one thing: Obama may believe it, but even if he didn’t it wouldn’t matter, because it is the law of the land. Flat out, Muslims have the same rights to practice their religion and build their community centers on private property — in lower Manhattan and anywhere — in accordance with local laws and ordinances. Full stop. Just like Ted Olson explained last week, that’s just the American way.

On Morning Joe this morning, Mike Barnicle has stressed several times that the U.S. is the most tolerant nation in the world – it doesn’t need to prove how tolerant it is. That hit it square on the head. The Mosque shouldn’t be built to prove tolerance, the Mosque should — and will — be built because that tolerance is built into the laws of the nation. The right to build even if people don’t like it is what shows that tolerance — and what proves it.

This is why Obama’s statement at Panama Beach that he was “not commenting on the wisdom” of the project was not a walkback of his initial statement on the Mosque. The right to build exists whether it’s “wise” or not. This issue is not about wisdom — though that is certainly up for debate. Might there have been better ways for the issue to have been broached? A public forum to air concerns and clear up confusion? Some better compromises to make more people happy? (I personally would love to see more of a inter-faith element to the project. Guess what? It doesn’t matter. And it shouldn’t.) If a Mosque can be built, and the zoning allows it, well then — go crazy.

So no, Rep. Peter King, Obama did not have a “moral” responsibility to oppose the Mosque. And no, Newt Gingrich, it’s actually not like Nazis putting up a sign next to the Holocaust Museum. And yes, Sarah Palin, Obama should be supporting the right of any religious group to build where legally permitted. Nice try, but even if that whips up your base, it’s just not right. As in accurate, correct, factual, the way this country does things, based on those inalienable rights long ago guaranteed by the Constitution — and protected to this day. I held those truths to be self-evident, but then again, the midterms are coming up.

Upshot: Obama can support the Mosque, without opining either way on whether it’s his dream project for the Lower Manhattan community. All the shouting may make things seem complicated, but actually it’s quite simple. Like Mike Barnicle says, no one needs to prove that America is a model of tolerance and equality. It just is. So — whichever side of the aisle you may vote from, or even if you don’t — I’d think we could say, God bless it for that.