On Iran Cash Payment, White House Doesn’t Deserve Your Benefit of the Doubt 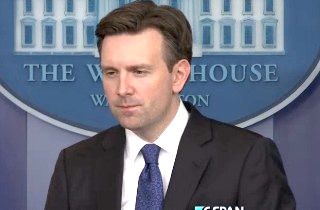 The Wall Street Journal had quite the scoop Wednesday, reporting that the release of four American hostages by Iran in January coincided with the delivery of $400 million in cash from the U.S. to the Iranian government. The cash, the piece not-so-subtly implies and Republican critics openly allege, was a de facto ransom payment to ensure the hostages’ release.

The Obama administration of course denies that claim, saying that the money was from a completely unrelated legal settlement with Iran and the timing was a coincidence. But The Wall Street Journal‘s reporting was partially backed up by one of the hostages in question, Pastor Saeed Abedini. Abedini told Fox Business Thursday that on the day of his release, he was told that they could not leave the country until a second plane landed. While certainly less credible, Iranian state officials also characterized the cash payment as a ransom at the time.

Even the White House’s denial is somewhat lackluster. Per the Journal, while denying the cash served as a ransom, U.S. officials “acknowledge that Iranian negotiators on the prisoner exchange said they wanted the cash to show they had gained something tangible.” When asked whether the prisoners would have been able to leave if the Iranians didn’t receive the cash, White House press secretary Josh Earnest refused to answer.

So really, at this point the White House is only bickering about terminology. The Iranians wanted cash before they returned the prisoners, the prisoners weren’t leaving until the cash arrived, but it’s not a ransom payment. Also, that animal over there walking like a duck and quacking like a duck? It’s an aardvark.

All this is besides the point, however. Even if the Obama administration had competently denied the ransom allegation… why on earth should we believe them?

That may sound overly harsh and insufficiency respectful to the president, but let’s go back to an exchange from a 2013 State Department briefing, after the administration was caught fibbing about whether they had been negotiating with Iranian hardliners. This was the exchange, you’ll recall, that was so damaging that it was intentionally deleted from the State Department website before being restored once they were caught years later.

FOX’S JAMES ROSEN: Is it the policy of the State Department, where the preservation of the secrecy of secret negotiations is concerned, to lie in order to achieve that goal?

STATE DEPARTMENT SPOKESWOMAN JEN PSAKI: James, I think there are times where diplomacy needs privacy in order to progress. This is a good example of that.

So after already telling reporters that they will deceive the public if it means preserving secret Iran deal negotiations, the administration is now denying that there was a secret condition to the Iran deal. And we’re apparently just supposed to take their word for it.

Honestly, I’m not too outraged by the deceit itself. On some level, everyone knows that the government lies when necessary and most people are perfectly comfortable knowing that there are certain things being kept from them for the sake of national security. But what bothers me is how much of the untruthfulness from the administration seems to be driven primarily by political concerns.

Take the secret negotiations with Iran: it is true that it would’ve been harmful to the peace process for the Obama administration to be open about the fact that they were negotiating with Mahmoud Ahmadinejad in 2011. But that’s only because the American people would’ve been outraged and protested that he couldn’t be trusted. There was also the small matter of an ongoing presidential election, during which Obama’s perceived lack of toughness on the world stage became a Republican talking point.

Even if you subscribe to the belief that Obama was right to initially deceive the American public because they were too uneducated (or immature, or whatever) to accept the negotiations, what purpose was served by having the administration continue to lie even after Ahmadinejad was out of power? Thankfully. White House advisor Ben Rhodes already gave us a frank answer on that front: “The idea that there was a new reality in Iran was politically useful to the Obama administration.” Again, lying about it furthered America’s national security interests as far as the administration was concerned, but only because political blowback would have threatened to scuttle the deal.

Which brings us back to the alleged ransom payment. I’m not saying that Obama administration is definitely lying, or that this can’t all be a coincidence like they claim it is. I am saying that after already admitting that they were more than happy to lie in precisely this sort of situation, I see no reason why they deserve the benefit of the doubt.